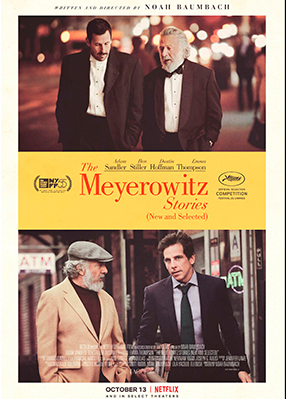 To be truthful, I am one of a few that has not loved Noah Baumbach’s movies. (I once famously said that after Fantastic Mr. Fox, for which he wrote the screenplay, we would never hear of George Clooney again! I was wrong.) But somehow I still go to every Baumbach film, thinking that ultimately I will find what everyone else has been talking about.

In his mind, Harold Meyerowitz (Dustin Hoffman) is one of the most important sculptors of the past fifty years. (He has a piece in the Whitney, but it has been long placed in storage.) That he has not received the acclaim that has come to his contemporaries and friends, he credits to his not selling out, his remaining pure in his artistic vision–unlike his peers.

This, of course, is purely delusional.

Harold’s other dysfunction is his personal life. He has been married four times–though he says “only three” because the first was annulled–and who has pretty much abandoned his first two children (to his second wife) for his son with his third. (His fourth wife when the film opens is Maureen, a drunken, late-hippy, wonderfully played by Emma Thompson.)

Matthew (Ben Stiller), the son whom he dotes on, lives in L.A., so it is up to his other two children, Danny and Jean (Adam Sandler and Elizabeth Marvel) to care for their father in New York City as he increasingly slips into angry dotage while finessing the drunkenness of his newest wife, his increasing delusion of his importance in the New York art world, and his general self-centeredness.

In fact, rarely has their been such a self-centered character in all of filmdom.

Now, if this seems like some sort of Bergman-esque psycho-drama, you are wrong. It is a funny, thoughtful ensemble piece that gives ample room for its many talented actors to shine. 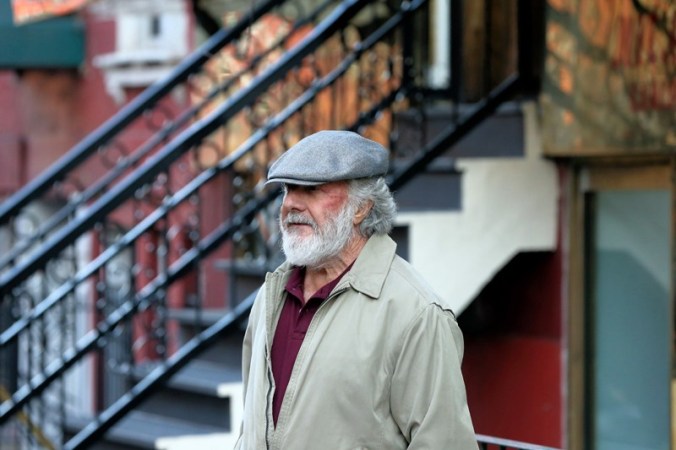 Hoffman, as the cantankerous Harold Meyerowitz, has been preparing for this role his entire life. Actually, I found much of his Ratso Rizzo in this character. Perhaps the voice is not as whiny, but still it is there, the complaining, set-upon kvetch.  (There is a subtle allusion to Midnight Cowboy and Hoffman’s character, when Meyerowitz’s son Danny  is chasing after his dad in mid-town New York, hobbled with a very bad limp. At one point, as he is hobbling across the street, one expects for a taxi to drive too close and for Sandler to start yelling, “I’m walking here! I’m walking here!”)

Nevertheless, Hoffman is a joy to watch.

But one expects that from Hoffman. It is the others who amaze. When was the last time, one has walked out of an Adam Sandler movie talking about his acting. As Meyerowitz’s 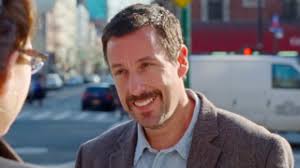 son, Danny, who’d been abandoned by the father he idolized, he has every intention not to make the same mistakes with his own daughter (Grace Van Patten) who is off to college to begin her own artistic journey. And their relationship is sweet and beautiful and everything that his own relationship with his father was not.

The sister Jean is even worse off than Danny, having been completely ignored for most of her life by her father.

And doted upon Matthew, who is the golden boy from L.A., successful in the world of mergers and acquisitions, is full of more buried hatred than the other two.

So the film deals ultimately with a time when they are all together in New York. Ostensibly for a group show–which Danny and Jean organized at the college where Harold taught–and for other family matters. Everyone needs to look a little closer at the truth of things. 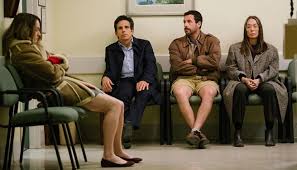 The Meyerowitz Stories (New and Collected) is  much fun, is thoughtful and revealing, and is a real treat for people who love movies (there are several cameos and fun allusions). For me, the film had been flying under the radar, but, without a doubt it is the best film I have seen in a very long while.