It’s been nearly six months since I last wrote a blog post. 2017 has not been fun. Keeping up with scandals and nominations, violence and presidential tweets, breaking news and old skeletons, incriminations and analyses, insults, retractions and lies has felt like a full time job.

Though it hasn’t been that I have not been busy–I have read more already this year than in a long time. It’s just that sitting down and putting down my thoughts on this blog seemed so pointless, so self-centered. And god knows the times call for less self-involvement and a lot more outward action.

But here I am again. Because I know that that too is important.

In Issue 221 of The Paris Review (Summer 2017), I read a interview with the Scottish writer, Ali Smith. The conversation was intelligent, thoughtful and enticing.

So, I went out immediately and bought two books: Artful (2013) and Autumn (2016). (I had read her novel Accidental several years back, was floored by its creativity and beauty, but for some reason never followed up on more.)

Artful, on the surface, is made up of the four lectures on literary criticism that Smith was ask to deliver at Oxford. It is also, at the same time, a ghost story, a love story, and a novel–a combination that only Ali Smith would attempt and could pull-off. It is an extraordinary feat–the criticism is sparkling (I have underlined passages and dog-eared pages) and the narrative is engrossing and engaging.

The novel Autumn, however, is the more current, and is what I so much needed to read, in these “interesting days.” And again, it is magical.

Daniel Gluck is an old man and he is dying. He is 101 years old. Housed in the

Maltings Care Providers institution, he is visited often by Elisabeth Demand, the young woman who has been his friend since she was thirteen, some twenty years ago. She is now an adjunct instructor of Art History–a subject he inspired in her as he taught her, as a young girl, how to see beyond surfaces and think and question all that she witnesses. 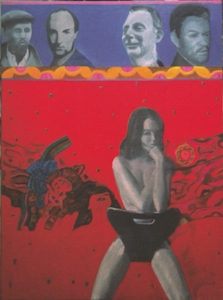 The remembered scenes of their past, innocent relationship are wonderful and inspiring and hopeful. Daniel is a wonderful and creative teacher and a fine companion for the young Elisabeth. He introduces her to Chaplin, to Keats, and to Plath.

More importantly, he introduces her to the British POP ART artist, Pauline Boty. It is she, a forgotten artist of the 1960s whose work captured the zeitgeist of the day–from Bob Dylan to Christine Keeler–whom Elisabeth writes her doctoral thesis on.

(And the scandal of Christine Keeler and the machinations of the two governments involved with her, sorely reflect the tenor of our own times. It is capturing this scandal that Boty is perhaps best remembered for.)

But now Daniel is dying and it is the summer of 2016, after the Brexit vote, and the UK is in turmoil. Elisabeth’s mother puts in best when she says:

Ali Smith  is writing in 2016 England but it very much could be here, now.

And that is what makes it so hopeful. For Daniel’s lessons and Elisabeth’s understanding of them underscore the importance and ultimate permanence of ART in turbulent times. For we learn that governments explode and implode, that pendulums swing one way and then the other, that movements and hatreds and despots come and go. But ART remains.

Daniel and Elisabeth’s relationship–a relationship with a 68 year age difference–is one that is based on love and trust and hope and acceptance.

And that, at least, is a bright light in these dark times.