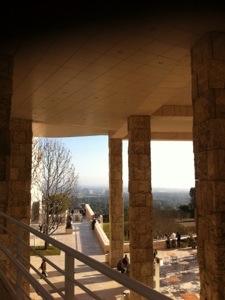 When I think of art museums, I think of urban spaces. In my experience, most large cities ensconce their major museums within the city landscape itself.  And often times, the buildings themselves are as impressive as the art they house: the majesty of the Louvre, the edgy hipness of the MOMA, the serenity of the capital’s Hirschhorn, the classical grandeur of Philadelphia’s Museum of Art, the modernity of the Tate. Yet, again, each is an urban creation, set upon city streets.

The Getty Center of Los Angeles, however, is something wonderfully different. To get there one must drive–as one always must in Los Angeles–along some congested stretch of highway ( the 405) and pull into a car park. From there you take a tram car 900 feet up a mountain and when you disembark at the mountaintop, you feel you have arrived on Olympus itself.

A sculpture “running” next to the tram car

The museum is open-aired. As you move from wing to wing, from gallery to gallery, you walk into the California sunlight–the San Bernadino and San Gabriel Mountains stretching out to the east, the Pacific Ocean to the west, the blue sky all around you. The buildings are constructed in beautiful white block with striated stone quarried in Israel and Italy that mutates in color from brown to gold to sandstone in the changing light. Large panels of glass and open-air passageways further blur the distinction between outside and in. As one museum docent said, “People come here with the idea that they’re going to a museum with works of art on the inside, but they’re really visiting a work of art with a museum inside.” 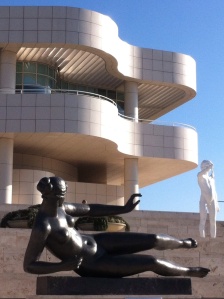 Sculptures both modern and contemporary are scattered throughout the grounds, so as you move from a special exhibition on Renaissance gardens to the Getty’s renowned permanent photography collection you must walk past Giocometti and Magritte and Henry Moore as well as Barbara Hepworth, Aristide Maillol and Charles Day.

“Boy with a Frog” by Charles Day

“Delusions of Grandeur” by Rene Magritte

The holdings –and the special exhibits–that the Getty museum houses are world-class and extraordinary. From Van Gogh’s Irises to Mapplethorpe’s photos, from Titian to Rembrandt to Monet, the Getty is a magnificent collection.

But I could spend the entire day there and never walk inside.

In case I didn’t say, there is also extraordinary art inside:

“Specimen (after Durer)” by John Baldessari

6 thoughts on “The Getty Museum, Los Angeles– “a work of art with a museum inside””