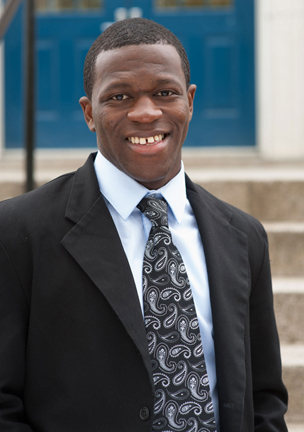 Last summer, an African student at my school asked me to help him with his college application essay.  I was surprised–I had never taught him, had never actually met him before, although I knew who he was.  He was very polite, wide-smiling, and serious about his studies.  When I read his essay, I knew why.

Adams Daramy was born in Sierra Leone during the height of its civil war, the brutal Blood Diamond wars.  By the age of six, he had witnessed mutilation and rape, had seen dead bodies in the street and children trained to kill, and had eluded mass killings and general thuggery. He had seen vultures pick at not-yet-dead bodies and had barely escaped being forced himself into the military.  He told me of the favorite intimidation tactic of the rebels–chopping the limbs off civilians–and how once he was forced to stand in one of two lines and how his line was spared, but the other were not.  And all this by the time he was six years old.

His mother, wisely, got him out of there.

Because of the wars, Sierre Leone had no infrastructure to process Adams’ coming to the United States, so Adams had to live for a year in the Ivory Coast.  He worked that year as a tailor’s apprentice, sending money back to his mother and learning still yet another language–the French spoken in the Ivory Coast. In his college essay, he described how wonderful it was having a morning coffee at a shop down the street before he went off to work.  He was now seven, the age when most of the children we know are taking their first steps off to school.

And yet, in his essay, he did not dwell entirely on the bad. He recalled how kite flying was a favorite activity in the coastal town of Abidjan and because of his tailoring skills, how he was able to make some wonderful and beautiful kites.  He was proud of them and smiled brightly when telling me. But mostly, he wrote about his mother. He wrote about her love, her sacrifices and her courage.

Fast forward now to 2013.  Adams had made it to the United States and lived with an uncle who had also escaped the horror that was Sierre Leone.  He enrolled in a good prep school where he succeeded in academics, athletics, activities and service. For his senior year, his classmates elected him president of the Student Council.  And all this success–the academic challenges, the championships on the track and field,  the rewarding service, the broadening activities and the solidarity with his classmates–all this came about while he was working long hours as an aide in a retirement home, sending the money home to the mother he had not seen in 12 years.

Yesterday, Adams Daramy graduated from high-school.  For the past three months, his classmates have been working very hard fund-raising and pestering a sometimes intractable bureaucracy to enable Adams’ mother to travel to the United States and be present at her son’s graduation.  On June 3, his mother was denied a visa.  The offices of Representative Pat Meehan worked overtime to see if they could have that decision changed, though they offered little hope. On June 4, the decision was reversed and she could come. Now, intricate travel plans had to be quickly expedited.

At midnight, ten hours before Adams Daramy would graduate from a prestigious American prep school, he embraced his mother, Grace Sankoh.

It was the first time in twelve years he had seen the woman he had written about so lovingly in his college application essay.

As with all graduations, there were speeches and homilies, awards and recognitions yesterday.  But nothing spoke so loudly about goodness and hope and friendship and love than the reunion of Adams Daramy and his mother.

6 thoughts on “A good story … and a story of goodness”