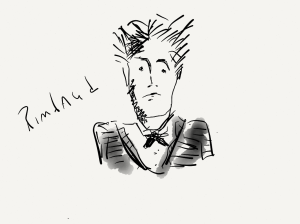 A colleague came up to me with a problem–a problem with some unruly boys who had been displaying a growing disrespect towards her, coupled with a sophomoric sexism that went beyond their adolescent asininity and a smattering of racism. She then went on to say that to make matters worse, they were also very good writers. I wondered to myself if what she said was not necessarily atypical–that their innate creativity is being strangled by the dysfunctions of the modern educational system and that that is one cause of their intractability.

To make the point, I told her, I wouldn’t want to have taught Rimbaud.

Ah, Rimbaud, the boy-child terror who created haunting, mesmerizing verses until he was 21 and then quit to become a businessman, to dabble in gun-running in Africa, and to even try to join the U.S. Navy. But whatever he did from that point on, he had quit writing and refused to talk about it thereafter. Yet in those five or six years in late adolescence, he cut a swath of creativity and destruction, of love and violence, of intelligence and stupidity–and blazed into the pantheon of world poetry.

In actuality, however, Rimbaud was in fact a fine, model student. While he was in school, he usually walked away with the academic prizes given out at the end of a school year. He wrote poetry in in his native French, as well as in Latin and Greek, mature verse, some of which is still anthologized. Indeed, he was a stellar student. But then he quit school.

When he was still sixteen–and with the encouragement and support of the older Paul Verlaine whom he had enamored with some verses –Rimbaud first ran away to Paris. There he began a meteoric life of debauchery, anarchism, promiscuity, violence, substance abuse–and the most intense poetic creativity.

And like a meteor, Rimbaud burned out quickly. His intense and volatile love affair with Verlaine ended with Verlaine shooting him twice in the arm. Verlaine was arrested and served two years in prison. 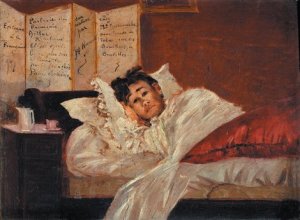 When Verlaine was released from prison, Rimbaud handed him a sheaf of loose papers which would become Illuminations, his last major work. Rimbaud was but 21 years old. He was already an old poet. Verlaine had published his FIRST book at 21. Rimbaud was finished by then. (A series of prose reflections, Illuminations is akin–in its intent–to the epiphanies that Joyce gathered –at the beginning of his career, however. )

Here are some 4 stanzas from Rimbaud’s 100 line poem The Drunken Boat (Le Bateau Ivre). He was sixteen when he wrote it!

But now I, a boat lost under the hair of coves,
Hurled by the hurricane into the birdless ether,
I, whose wreck, dead-drunk and sodden with water,
neither Monitor nor Hanse ships would have fished up;

Free, smoking, risen from violet fogs,
I who bored through the wall of the reddening sky
Which bears a sweetmeat good poets find delicious,
Lichens of sunlight [mixed] with azure snot,

Who ran, speckled with lunula of electricity,
A crazy plank, with black sea-horses for escort,
When Julys were crushing with cudgel blows
Skies of ultramarine into burning funnels;

I who trembled, to feel at fifty leagues’ distance
The groans of Behemoth’s rutting, and of the dense Maelstroms
Eternal spinner of blue immobilities
I long for Europe with it’s aged old parapets!
(From Arthur Rimbaud, the Collected Works, translated by Oliver Bernard)

So the question remains “Would I want to have taught Rimbaud?” I am not sure. I am not sure of myself. Rimbaud–the excellent student, remember–was fortunate to have an exceptional school teacher and mentor, George Izambard, who fostered and encouraged the boy’s talent, gave him free access to his personal library and pushed him towards greatness. That is a big responsibility, to see and encourage greatness.

But in a large way, that is the true nature of teaching–whether it is a future Rimbaud or not. For how are we to know?

One thought on ““I is someone else”: Rimbaud–l’enfant terrible”