As many of you know, I am teaching a course in modern Irish literature this term to a group of 18-year old American boys.  As an American classroom, it is filled with various ethnicities and races.  And so, I can never assume that they know what I–or the authors they are reading–are talking about.  And so when we began Martin MacDonagh’s Lonesome West, I knew it was going to be a challenge to get them to enjoy it. 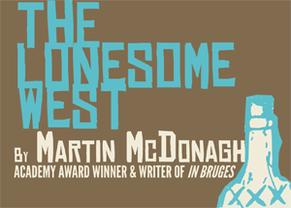 Because, when all is said and done, that’s really the purpose…to get them to enjoy what they are reading.  And surprisingly, that is a difficult thing for them to do.  Sure they loved saying the word “fek” when we read the play out loud–and which sometimes occurs twenty-five to thirty times on a page.  (One student told me he loved the word so much he started saying it around the house.  I advised him that maybe he should rein it in a bit.)

But surprisingly, they were too uptight to enjoy the humor…or even to get it!  There is a great line where Father Walsh Welsh — even that’s funny: I explained that this character has appeared in three separate plays now and that no one ever gets his name right, so they continually call him both. Stone faces in front of me. … anyway, there’s this great line where Father Walsh Welsh is anguishing about his failure as a priest.  Coleman tries to reassure him:

Ah there be a lot worse priests than you, Father, I’m sure. The only thing with you is you’re a bit weedy and you’re a terror for the drink and you have doubts about Catholicism. Apart from that you’re a fine priest. …

I had to explain that that was funny.  I had to explain that Girleen’s blatant attempts at seduction, her outrageous dirty-mindedness, and her falling in love were funny. (The pathos of her ending was a whole other story!) That Coleman’s constant ribbing of Fr. Walsh Welsh about the priest scandal in Ireland was funny. And that a small village where a father has been murdered by his son, a mother by her daughter, and a wife by her husband is a funny world indeed, especially when the smashing of holy figurines or stealing poteen is considered a more serious crime.

They were fine in talking about themes of redemption and reconciliation, in tracking down and explaining symbols, and analyzing character.  But they stumbled upon the humor.  And when all is said and done, that might be more important than all that the other stuff. 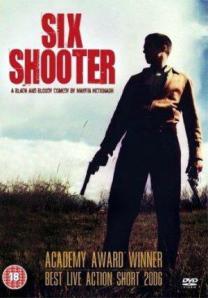 And so I thought I would relieve their reading by showing them MacDonagh’s Oscar winning short film Six Shooter.  Unlike most of MacDonagh’s work which takes place in the west of Ireland, this takes place in  southeast Ireland, particularly on a train to Dublin.  A man is returning from hospital where his wife has just died that morning. He boards a train to go home and sits next to a young twenty-something who is a bit more than strange and possibly deranged.  The boy’s patter, aggressiveness and nonsequiturs are amusing, uncomfortable, and awkward.  But they are also, at times, bizarre and hilarious.  But maybe not to a group of high-school Americans.  Suffice it to say that by story’s end we have seen a cow explode, a rabbit get shot, a woman throw herself off a train, a character gunned down by police and a man fail at his attempt at suicide.  And that is  the violence that happens just on screen.  (I explained to them that MacDonagh was a combination of Quentin Tarentino, David Mamet, and John Millington Synge.)

Anyway, if a short movie that moves the cartoonish violence of Tarentino into the idyllic countryside of the Irish coast sounds appealing, then here it is below. It did win a 2006 Oscar in movie, though I don’t know if that held any sway with my boys.  Here it is:

One thought on “The Blackest of Comedys: Martin McDonagh’s The Lonesome West and Six Shooters”