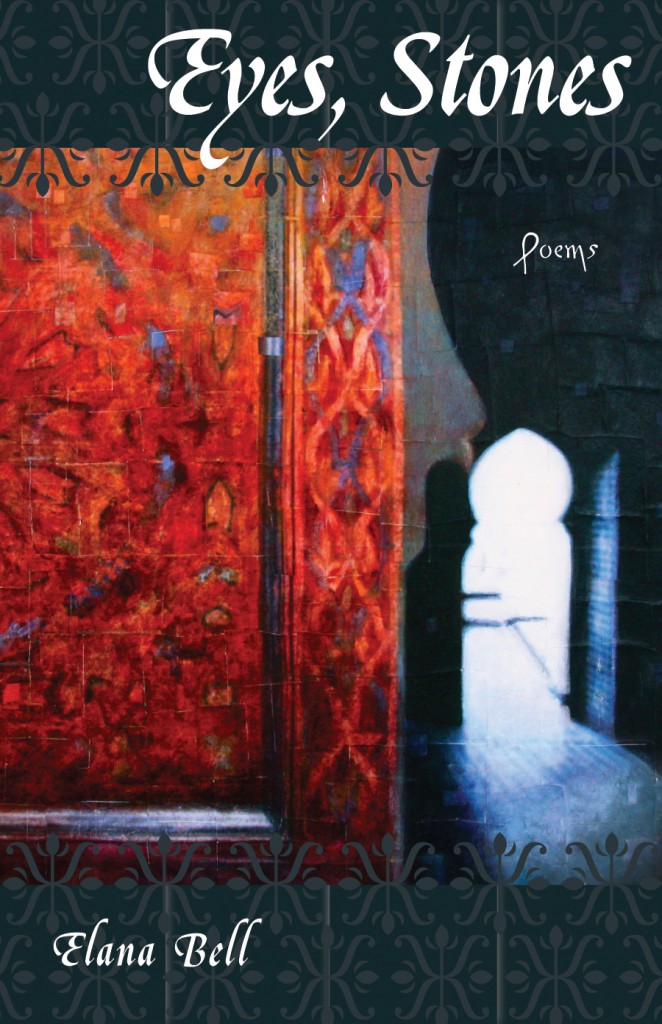 Eyes, Stones–Elana Bell’s first collection of poetry and the winner of the 2011 Walt Whitman Award–is an extraordinary feat of poetry and clear-mindedness.  Each of these 40 small poems are dense explosions of beauty and clarity, encased in language that is both modern and antique, beautiful and brutal–much like the countries that she writes about.

In her poetry, Bell attempts to look and understand the worlds that are Palestine and Israel. She moves from biblical stories to modern events and much in between. Her topics range from the ancient relationship of Abraham and God, Sarah and Hagar, Ishmael and Hagar to the modern Holocaust, the Zionist movement, the 1968 Egypt-Israeli War, and the most recent Intifada.

But what is remarkable about these poems is that they don’t stink of politics, of nationalism, of self-righteousness.  They are simple poems that lay bare the simplicity of man’s pain, the artlessness of his troubles, the wonder of his existence. Often, in these poems one is unsure which side of the Israeli-Palestinian conflict Bell sits, her treatment is so even-handed.

Take for instance her poem “Naming the Day,” which is a composite both of those Jewish villages in Eastern Europe destroyed or made “Jew free” AND those Palestinian villages destroyed or evacuated during the 1948 Arab-Israeli war.

In “On a Hilltop at the Nassar Farm,” the speaker admires the Palestinian woman Amal:

“Amal laughs with all her teeth and her feet
tickle the soil when she walks. She moves
through her land like an animal. She knows it
in the dark. She feeds stalks to the newborn
colt and collects its droppings like coins
to fertilize the field. Amal loves this land
and when I say land I mean this
exact dirt and the fruit of it.“

Amal’s rough existence she compares with her own existence in the settlement that surrounds Amal’s land:

“All around her land the settlements sprout like weeds.
They block out the sun and suck precious water
through taps and pipes while Amal digs wells
to collect the rain. I am writing this poem
though I have never drunk rain
collected from a well dug by my own hands,
never pulled a colt through
the narrow opening covered in birth fluid
and watched its mother lick it clean,
or eaten a meal made entirely of things
I got down on my knees to plant.“

Yet Bell’s work does not rise from the guilt of the occupier.  It comes from a genuine love of the people–both Arab and Israeli–and a horror of the world that has evolved around them.  A particularly poignant poem, “In Another Country It Could Have Been Love,”  laments what could be between the two:

…
The next time I saw her, a rifle
strapped her shoulder. The tip
of it fingered my ribs, my hips
the inside of my thighs.
Cold metal instead of her hands,
her eyes.

Elana Bell herself is the granddaughter of Holocaust survivors, and as such, her examination of Jewish and Arab relationships is strikingly honest. She maintains an embracing love of the land through its many incarnations: biblical landscape and Zionist dream, modern nation and occupied territory.

In the end of the collection, she returns to Brooklyn where she lives. There she will “watch the Super Bowl…eat organic greens and make love on Saturday afternoon…[She will] listen to jazz in tight-packed clubs…and sleep on clean cotton sheets.” It is during this sleep, however, that the Mid-East comes to haunt her, to remove her from her comfort, and to tie her to the lands of her heritage.

Eyes, Stones won the 2011 Walt Whitman Award of the Academy of American Poets.  Five of her poems (along with her bio) are published on the Academy’s website. Check it out. She is a remarkable woman and a fine poet.

One thought on “Book Review: Eyes, Stones by Elana Bell”