Ah rejection! It is the most certain part of the writer’s life. And we all have had our share. Putting something out there, for someone else to judge, to deem suitable for his or her journal/magazine/anthology/contest, is risky. The odds of receiving a “no” are much larger than receiving a “yes.”

At least they are for the less established writers. Which is the majority of us.

Having said that, however, 2012 has been a particularly successful year for me. Even Duotrope–the wonderful submission/market site that I use– congratulated me saying that my “acceptance ratio” is higher than average for users who have submitted to similar markets. And my rate for both fiction and poetry is a measly 21.4%!

But lately, I’ve hit a fallow patch. Stories going out, rejections coming back.  Indeed, one journal (who in fairness won’t be named) e-mailed the same rejection to me three times in one day! Talk about Churchill’s black dog in the afternoon!

So at the moment, I have eleven pieces out there awaiting some editor’s thumbs up or thumbs down. Two have been out there for five months.  If I continue at my current above average pace (hah!) then I can expect two of the eleven pieces to get the okay.

And when that happens all the self-doubt and depression (understandable with a three-pronged rejection) disappears and one once again fantasizes about quitting the day job and really getting it done fill an hour or two of my daydreams. 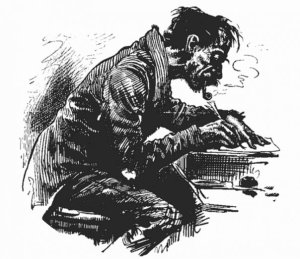 Someone once told me that if I really love a particular phrase or passage, I should probably discard it! Reject it! My love of it is a signal that it is too”special” and doesn’t belong in the work. And he is probably right. Be careful when you are feeling particularly “writerly.”  Not a good portent for good writing.

Another story I heard was that the writer Ray Bradbury would complete a piece, date it, and file it away for a year to the day to begin editing it. He believed that when he first completed a piece, he was too enamored with it to critically re-write, edit, and polish.

But who has that kind of time?

I know one of my many faults is to believe something is finished well before it is. I do not edit well on a computer screen and there is a certain part of me that cringes at printing out drafts.

So my August 1 resolution will be to do better editing, better re-writing. Maybe I’ll even start printing out my work to look over…but certainly on both sides.

P.S. Originally I had no  graphics in this post because

I wrote it on my iPad on a cross-country plane with WiFi from Los Angeles to Philadelphia.

How cool is that?

But when I got home my interior clock was a bit askew, so I returned and added some images.