I am going to try to write this without disparaging any religion. (Although I maintain my right to think that certain things are more than ridiculous. This is America, though, and one can usually worship however one pleases.) I am tolerant of most things as long as no one is hurt  And that is the litmus test that this particular sect fails. A sect that still believes in polygamy, in “perfect obedience” from wives, in children brought to marriage as they reach puberty–this is wrong-minded, de-humanizing and abusive.

I went to an opera Friday night–a friend’s niece was in a starring role. The opera was entitled Dark Sisters and dealt with a fictional raid on a polygamist ranch by government officials.  The raid closely paralleled similar raids that took place in the late 20th-century in southwest United States.

Written by Nico Muhly and Steven Karam, Dark Sisters opens with five wives mourning their children who have been taken from the ranch by the government. (Four hundred plus children have been removed.) The Father–the husband of these women and a supposed Prophet of God–tells them they must not mourn. They must “keep sweet.”  One of the wives, Eliza, bristles under her husband’s commands, worries for her children, and begins to doubt the rightness of their religion.

Another wife, Ruth,  is teetering on the edge of sanity. Her two young boys have died and Father has forbidden her to mourn. It is God’s will he explains. He also refused to allow her to seek medical care for the second son. (There is a hint that male children are unwanted and often put out of the compound. Sons are not breeders like the girl children and often can grow into rivals for the patriarchs.)

When Father goes out into the desert to pray, Eliza tries to make the other women realize what has happened. They refuse to believe her–although they almost come to her side–and see her as an apostate, a tool of the devil. For them the abuse, the sadness, the pain is the price they must pay in order to gain their heavenly reward where–significantly enough–they speak of joining their mothers and grandmothers, women who for generations have been part of this structure.

Eliza’s determination is hardened completely when she discovers that Father has arranged for the marriage of her fifteen year old daughter, Lucinda. She vows to speak the truth.

The second act begins with a news-magazine show covering the government’s raid on the ranch and interviewing the five wives.  The wives all parrot the beliefs of Father and their religion, proclaiming they are more free than the women in the real world, which they have never seen but only heard about from Father.  Only Eliza and Ruth dissent.  Eliza tries to speak her truth while Ruth’s testimony shows how dangerously fragile her psyche is becoming. 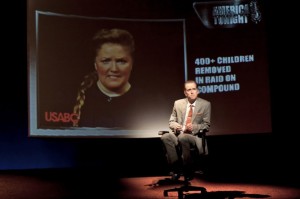 When the Supreme Court decides that the children must be returned to the ranch, life goes back to “normal” except for Eliza who has left.

Ruth decides-if that’s the right word in her distraught state–that she has had enough.  She climbs the mountain and throws herself off the cliff.

The last scene is Ruth’s funeral. Father and his five wives–he has replaced Eliza with a new favorite, her fifteen year old daughter–surround the grave. As they mouth their pieties, Eliza appears in modern but modest dress. She tries to convince them all of the truth of their imprisonment, but her arguments fall flat.

At last even her daughter,  whom she has tried so hard to liberate, turns against her. Taking Father’s hand, the young girl leaves her mother alone at the grave of the dead Ruth.

I know little about opera, and nothing about opera in English.  The story was riveting.  The set designs, the video pieces, the special effects were mesmerizing. And the music was beautiful and provocative.  I was not impressed with the lyrics, however. Maybe hearing an opera in English–instead of in French or in Italian or in German–takes something away from the magic and romance for a native-English speaker.  But many of the lyrics–while advancing the story–seemed artless. Commonplace. Perhaps it is simply the language.

Nevertheless, Darkest Sisters is an important piece.  For some reason, recent years have seen a surge of interest in polygamy.  There is the HBO series Big Love on television about a man and his wives and a reality-show Sister Wives that deals with a man and his four wives and combined children. Both shows deal with the difficulties of living in such large extended families, but neither really touches on the underside.

Dark Sisters does.  This is not a work debating the rightness or wrongness of government intrusion into private lives. That is not the focus of this piece.  Perhaps that is the subject for another piece. Dark Sisters focuses on a religious system where women are completely subservient, completely powerless, and –to my mind–completely brainwashed.

I don’t think anyone’s god should condone that.