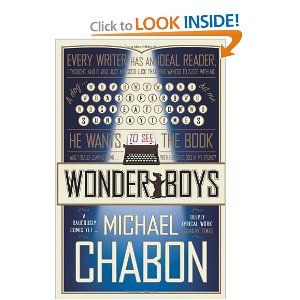 I read Wonder Boys last week.  I had read it previously, at least twenty years ago, and, boy, had I misremembered it.  As a younger man, I found inspiration in the “wunderkind” writing student and was fascinated by the famous writing teacher who is famously blocked with his novel (also called Wonderboys) that is going on past 2600 pages long.  This time around I did not have the same reactions.

Part of the problem is also that I could not get the film adaptation out of my head– a film I had seen in the long interim between readings.  In the film, the famous writing teacher is played by Michael Douglas, his cynical, jaded literary agent by Robert Downey, Jr., and the fabulous writing student by Tobey Maguire.

And while I remember enjoying the movie greatly–and understand why marquee actors are used–I think  it was terribly miscast.

Grady Tripp is the dissolute writing teacher.  He smokes way too much dope, he is cavalier in his relationships, and he is always looking out to score. In the novel, he is over-large, a big hulking bear of a man.  In one scene, when he is spiraling into what might be a catastrophic relationship with a young student who rents a room in his basement, he notices his reflection in the mirror. He sees a middle-aged, bearish man slumped down over this young college girl as they slow dance together. It is a moment of self-awareness–aided by a large quantity of pills, dope, and alcohol enhanced by pounding adrenelain after a slapstick night of antics. The man he sees in the mirror no way is the stylish professor played by Michael Douglas.

The young writing student is a-social and painfully awkward which Tobey Maguire captures but he is not nearly dark enough. In the novel, James Leer is very dark, in a long overcoat of indeterminate material and age.  And Robert Downey Jr. did not match my vision either. I know that most people quibble with the casting of books they’ve read when they are made into movies.  And this is my quibble: the cast is too handsome.

But enough about the movie…

The novel starts out on a rollicking tear. On the night that the novel begins Grady Tripp finds a note from his wife saying she has left him, he picks up his agent and the transvestite he met on the plane, his mistress–Chancellor of the school and wife of his Department Chairman–tells him she is pregnant, he gets bit in the leg by a dog, and he is traveling around with a tuba, a dead dog, the coat Marilyn Monroe wore at her wedding to Joe DiMaggio and a student who may or may not be suicidal…or truthful.  It reminded me of John Irving at his best.

An academic farce, there are set scenes of college gatherings and festival lectures. There are Tripp’s musings on the requirements of good writing, his praise for James Leer’s young but promising work, and insights into a truly blocked artist–one who comes to no longer believe in the work he is doing.

The female characters, his wife, his mistress, the student living in his house, however, are very shallow–cardboard figures created for Tripp to act or react against. 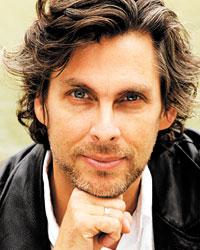 That the novel famously echoes Chabon’s early writing life makes reading it this much later in his career offer its own rewards.  Like James Lear, the young student, Chabon received a book contract for The Mysteries of Pittsburgh when his writing professor–unknown to Chabon–passed the manuscript on to his own literary agent.  And like Grady Tripp, Chabon worked years on a follow-up novel–a novel that grew enormously large before he himself destroyed it.

Since The Mysteries of Pittsburgh and Wonderboys, Chabon has continued to win great praise and loyal readership.  His novel, The Adventures of Kavalier and Clay won the Pulitizer Prize for fiction in 2000 and his 2007 novel The Yiddish Policemen’s Union won the Hugo, Nebula, Sidewise and Ignotus awards. (An aside–I was in Quebec city one week and needed something to read. There was primarily only French book stores. In one that I stepped into there was a small rack with about a dozen books written in English. It was there that I bought the Yiddish Policemen’s Union.)

And while his first novel–The Mysteries of Pittsburgh–and the novels following Wonderboys deal directly with Jewishness and Judaism, it is a very minor theme in Wonderboys.  There are touches of it when Tripp and James go visit his Korean ex-wife for Passover Seder and bumps against it when James’ own history is revealed, but it is not forefront in the novel.

Instead this is very much a novel about writing–or not writing as is Tripp’s case.  It is academic because it takes place on a university campus and deals with chancellors and professors and students and chairmen, but there is no scenes within a classroom. It tries to be a novel about love and contentment–but Tripp’s long road there, it is his third wife that leaves him and his tentative gestures towards his pregnant mistress are filled with doubt and fear.

All in all, though, Wonderboys is a wonderful read.  The beginning is peerless–quick moving, deft character sketches, and hilarious plotting. If the second-half seems to suffer from a bit of a hangover, it is because nothing could keep up with the original momentum. The novel must switch rhythms to mirror Grady Tripp’s more thoughtful musings, fears, and discoveries.

Do read Wonderboys or, if you want, rent the film.  Both are very enjoyable.  Just don’t do both too close together. And when you finish with those give Chabon’s other titles a try. Any of them are well worth the time spent.