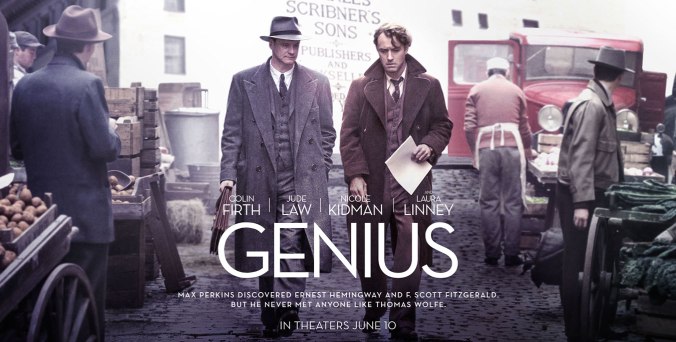 There is a scene towards the end of Michael Grandage’s film Genius where Scott Fitzgerald (played by Guy Pearce) is in Hollywood, drinking Coca-Cola and working hard on The Last Tycoon.  He has failed and given up on screenwriting, he is trying to keep his drinking in check, and he is hopeful for his new work. I mention this because it is the fourth time I have seen (or read about) this moment in the last two months. It is a pivotal point in Fitzgerald’s short life, and Fitzgerald and his world certainly seem to be “trending” these days. (A film version of The Beautiful and Damned is now in production; Z: The Beginning of Everything is airing now on Amazon; and Stewart O’Nan’s West of Sunset hit the shelves in the spring.)

Genius is about Fitzgerald’s world. He is only a minor figure — borrowing money, taking care of Zelda, scolding Thomas Wolfe for ingratitude.  Hemingway (Dominic West) also puts in a brief appearance and when he does, he seems the most pragmatic of the lot. 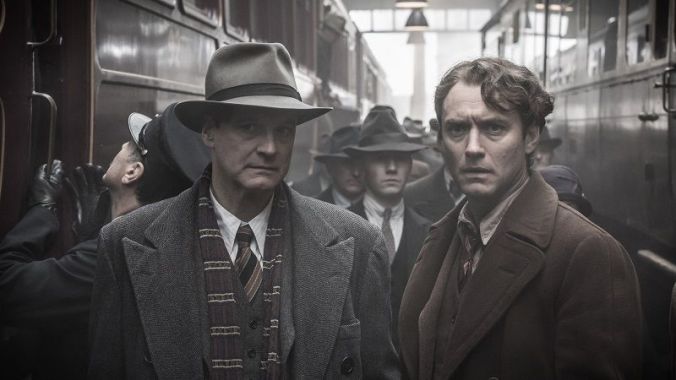 Genius is based on A. Scott Berg’s book Max Perkins: Editor of Genius and concentrates primarily on his relationship with and molding of Thomas Wolfe. And while the book title implies that Perkins was the editor of men of genius, such as Fitzgerald and Hemingway, the film leaves one wondering whether it was Perkins who was the genius after all.

Wolfe (Jude Law) explodes into Perkins’ office at Scribner’s, expecting to have his manuscript rejected by yet another New York publisher. When Perkins (Colin Firth) informs him that they want to publish him, a very close and productive relationship begins.

Wolfe is overlarge in his personality and writing, and Jude Law plays this for all it’s worth, chewing up every scene he is in, which is the majority of the film. His gregarious, boiling over energy is in stark contrast to Perkins whom Colin Firth plays with reflective gravity and business-like rigidity. The contrast seems as if it would sabotage the relationship, but it does not.

There are other issues buried much deeper.

When Wolfe first comes to Scribner’s, he is being supported and promoted by his lover, Aline Bernstein (Nicole Kidman), who quickly becomes jealous of Perkins’ influence on and success with Wolfe. Perkins’ wife Louise (Laura Linney) also is concerned with the amount of time that her husband is spending with his new client; (He needs to spend time, Wolfe’s second novel is over 5000 pages long when he brings it to Perkins.) She counters his argument that only once in a lifetime comes such a writer as Wolfe with the fact that only once in a lifetime will he have his daughters around him.

His responsibility to Wolfe overrides her logic.

But it is hinted at that there is a deeper foundation to Wolfe and Perkins relationship. For Wolfe, Perkins has become a father-figure, replacing the father that he lost when he was a young man and who he has been writing about ever since through two very large novels. For Perkins, Wolfe was the son he never had.

And like many father-son relationships, there has to come a break, when the son feels he must strike out on his own. When Wolfe makes this break, we know it will not end well.

Genius is a wordy film, as any film about Thomas Wolfe needs to be. It is hampered, perhaps by scenes of writing and editing, scenes that never translate well to the screen, and by the melodrama of Wolfe’s and Bernstein’s affair. 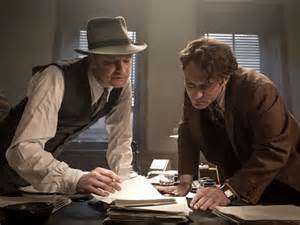 But it is an honest film, built on the back of Colin Firth’s nuanced, quiet performance. Allowing Law’s Wolfe to rage and celebrate and orate and revel, Firth’s Perkins builds a quiet portrait of a feeling man, conscientiously doing the job he loves and loving the man who is his job.

Filmed in a palate of brown and greys (contrasted brightly when Wolfe visits Fitzgerald in Hollywood), it is a film about words not images. About a man of so many, many words, Genius is a tragic view into the blistering comet that was Thomas Wolfe. More importantly, it is the story of Max Perkins, the man who burnished Wolfe’s blazing talent for the world to know and  remember.