Ca’ the Yowes to the Knowes
By Robert Burns

We’ll gae down by Cluden side,
Thro’ the hazels spreading wide,
O’er the waves that sweetly glide
To the moon sae clearly.

Ghaist nor bogle shalt thou fear;
Thou ‘rt to love and Heaven sae dear,
Nocht of ill may come thee near,
My bonie dearie.

Fair and lovely as thou art,
Thou hast stown my very heart;
I can die—but canna part,
My bonie dearie.

I first became interested in Robert Burns’ poetry as a young man. My father—who was not a particularly “learned” man but who was an
inveterate reader—would often recite snippets of his poems when I was a child, particularly “To a Louse”  and “To a Mouse,” two of Burns’ more famous poems besides “Auld Lang Syne.” 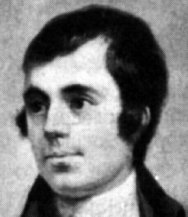 I often have taken to heart my father’s repeated phrase “O would some power the giftie gie us to see ourselves as others see us.”  And, of course, he loved to reassure us that “The best-laid plans o’ mice an’ men gang aft agley.”

My next encounter with Burns was at university, in a wonderful seminar on 18th-century British poetry. It was then that I discovered his full range, his politics and his romanticism, his life and his career, his Scots poems and his English poems.

And then he kept cropping up in a different facet of my life.  Playing in a “Celtic folk band” for several decades, I kept encountering Burns’ poems set to music and recorded by some wonderful performers such as The Corries, Dougie MacLean, and Mary Black.  (When I would perform a Burns’ song–usually “Green Grow the Rashes-o” or “Auld Lang Syne,”  I often would introduce it by stating the many parallels that existed between my life and his, although mine was not quite as “rollicking.”)

I try to teach him in my Advanced Placement course, but I don’t think my enthusiasm is as contagious. Oh well. Maybe they’ll discover him when they are ready.

And so here is my third Video Poem.  The first came from a published poem of mine, the second from a poem I have not even sent out yet, and now this by a canonical poet from the 18th century.  Enjoy