In 1972, Francis Ford Coppola released The Godfather, the film version of Mario Puzo’s blockbuster novel from three years earlier. Four years later he released The Godfather II. Both the novel and the films were more than just extraordinary successes, they became part of America’s cultural weltgiest. They were widely honored and celebrated and they spawned scores of imitations–some good, some not so good.

And for a while there, when one heard the word “the Family,” one reference came immediately to mind: organized crime.

So it was with not a little irony that Rolling Stone published sixty-nine Richard Avedon photos under the umbrella title “The Family.” The issue was published on October 21,1976–just before the 1976 election and little after the Bicentennial celebration that summer. The mood of the country was neither particularly joyous nor overly patriotic. It had been a rough eight years.  And Avedon’s portraits were of the U.S’s elite–the most powerful men (and a few woman) in the United States. Several would later move into even more powerful and influential roles.

Avedon’s portraits are stark in their simplicity. The subjects stand before a white screen. There are no props (although Katherine Graham does hold her eye-glasses in her hands.) Most are straight-on, some slightly turned. And most stare straight into the camera.

They are revealing portraits.

So it was great fun strolling through these portraits on display at the National Museum of American Jewish History and thinking of what have become of some these powerful figures. (The exhibit ran until August 2.) More than a few of the subjects have had large effects on American life since these photos were taken in 1976.  There is George H. W. Bush, head of the CIA; Donald Rumsfeld, Secretary of Defense for Gerald Ford; Ralph Nader, described simply as a “Consumer Advocate”; Ronald Reagan, at the time simply the “Former Governor of California”; W. Mark Felt, a former Associate Director of the FBI (and whom we know now was the infamous “Deep Throat” of Watergate fame); and Jerry Brown, in 1976 the youngest governor in California history. Thirty-five years later, Brown was again elected and became the oldest governor in California history.

Avedon who started out as I.D. photographer for the Merchant Marines, entered the world of fashion photography (he is the model for Fred Astaire’s character in Funny Face) and shot for Vogue, Harper’s Bazaar, and Life. While still immersed in fashion photography, he began taking portraits of those involved in political dissidence and

social issues, celebrities and workers, the demi-monde and the hard-scrabble. While his fashion photography may be timeless, it is these “social” portraits that are the most powerful and unforgettable.

Such was Avedon’s reputation, that after “The Family” shoots, George H. W. Bush–America’s chief spy-master at the time–wrote the following to Rolling Stone:

It was a pleasure having Mr. Avedon out here at CIA… .  I don’t know if he was as scared to come out here as I was in posing for the great Avedon, but he sure has a neat way of putting his victims at ease and I enjoyed our short time together. 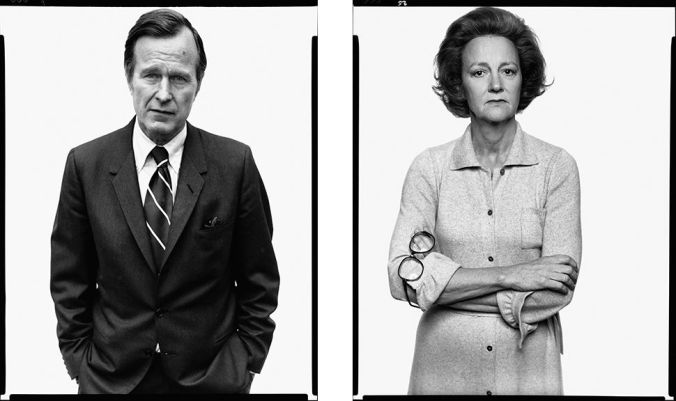 The following are the list of subjects of Rolling Stone’s photo-essay “The Family”. These photos were part of the National Museum of American Jewish History exhibit, Avedon: Family Affairs.

Besides the portraits from the Rolling Stone piece, the exhibit “Avedon: Family Affairs” also contained several large scale murals of other different “families.”  His portrait of the Chicago Seven is notable because of the absence of Bobby Seale, who had been jailed the day before the group shot was to be taken. There is a large mural of Andy Warhol’s “Factory” denizens, notable here for containing two portraits of Joe Dallesandro–one nude, one clothed. And there is a wonderful portrait, the largest of all of them, of Allen Ginsberg’s family. The family–celebrating the publication of Ginsberg’s father’s collection of poems–is a wonderful group, disparate like all families, but very much connected. Some hold plates with cake, some hold coffee cups, one sits, the rest stand, some stare at the camera, some look away.

It is a honest family shot of an American icon.