Recording on the beach
illustration 2015 by jpbohannon

In the introductory material to the New York Review of Books‘ re-issue  of this 1968 novel, the writer Stephen Koch states that Linda Rosenkrantz was the precursor of “reality tv” with this inventive, unusual work. He says that Rosenkrantz’s technique, far more than anticipating reality television, was even the precedent for everything from Friends to Broke Girls.

His latter assertion, he bases on the fact that this novel deals with two “twenty-something” women and one male talking about relationships, hopes, dreams, and reality. Before Rachel, Monica and Ross dished, Rosenkrantz’s characters were doing the same.

And before Snooki and the “Situation” shared more than we wanted to know about their adventures at the Jersey Shore, Rosenkrantz’s kids were already at it.

And how she did it was that she took a tape-recorder (they were very bulky in the mid-1960s) everywhere she went one summer, on the beach, in the shore-houses, at clubs. 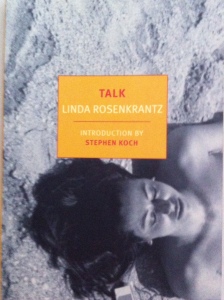 The concept sounded wonderful. Rosenkrantz took her tape recorder and recorded her friends as they made dinners, basked on the beach, drove to clubs, and packed and unpacked.

At the end of the summer, she had more than twenty-five characters speaking the truth–or at the very least speaking. And they speak a lot.

Thankfully, she winnowed the twenty-five down to three: Vincent, a gay male painter; Emily, a struggling actress with a drinking problem; and Marsha, who has a “serious” job in New York, and who is the anchor of the novel. All of it is supposed to take place against the background of New York’s edgy art scene, with Warhol the subject of more than one name drop. (At the time, Rosenkrantz was editor of Sotheby’s Auction magazine and was quite cognizant of all the goings on in the art world at the time.)

The three are all at the shore. They are all in therapy. And they share their therapeutic insights with us. And on top of it all, there is an odd love triangle.

Emily loves Marsha. They are the best of friends and Marsha tries to nurture Emily through her psychiatric problems and her drinking. Vinnie understands Emily more than he understands Marsha, but Marsha is madly in love with him despite knowing he is gay. (And there are hints that Vinnie might also be in love with Marsha, but… .)

Take these three people, have their conversations recorded, and then transcribe them in a novel may have worked 50 years ago, but it does not work today. The psychoanalysis is juvenile, the relationships are sophomoric, and the conversations–for the most part–are deadening.

Koch was right when he said Talk was the precursor to reality television. He just didn’t tell us that it was the precursor of all that was inane, self-indulgent, and titallating about the genre. Talk might have been ground-breaking in 1968, but in the 21st century, it doesn’t even work as anthropology.

Imagine sitting on a towel on the beach next to these three people, discussing their analysis, their love lives and more. It would be enough for me to hope for a rip tide.