I began writing this post back in September.  And then I let it fall fallow.

And I only have posted three things since then and nothing at all in December. (I wrote about one movie, one short story, and one novel.)

And now I see that A Summer’s Tale itself has just now been released on video.  I am late for the movie goers–but maybe not for the cinephiles.

In the middle of September, there was a spate of perfect days. The air was beginning to get crisp, but the skies were clear and there was still plenty of daylight left. I had the evening clear for some reason and I decided to treat myself:  dinner and a French movie. 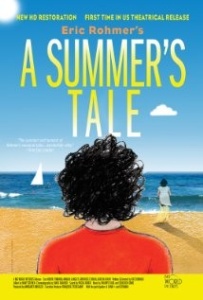 U.S Poster for A Summer’s Tale

I stopped at one of my favorite spots–National Mechanics–and had my usual, the cheese board and three glasses of red.  I love eating alone. I love 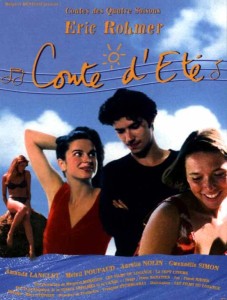 French poster for “A Summer’s Tale”

people watching, I love reading while I eat.  After the meal, I rushed the two blocks to the movie house–it was not crowded.

A Summer’s Tale is an odd story and one whose history I could not get to the bottom of.  It was filmed as the third of Rohmer’s four part cycle entitled Tales of the Four Seasons.  It was released in 1996, but unlike the other three seasons it was never released in the U.S. until now. Why?

I couldn’t find out.

The film follows young Gaspard, a young mathematician and aspiring musician. He arrives on vacation on the Breton coast, expecting to meet up with his girlfriend, Lena. But Lena does not show when he thought she would.

In the interim, Gaspard is befriended by a quirky waitress Margot who, although having her own designs on him, tries to fix him up with her friend, Solene. Everyone seems to be attracted to Gaspard, but he is confusingly aloof.  There are conversations between the different pairings, but they are not particularly revelatory. Unless, that is, if you find the self-involvement of young people in a resort town to be a revelation.  All we know is that Gaspard struggles with this odd triangle of women in his life.

Then, Lena shows up.  Was Gaspard exaggerating his relationship with her?  Was he deluding himself?  For when she shows up, she is not as smitten with young Gaspard as he was with her in her absence. And she certainly would not have passed up the chances for romance that Gaspard did.

And so the film ends, with Gaspard still torn between the three young women on his summer vacation–and–shades of every sit-com ever–finds himself having promised to escort three different women to a nearby island. But by now, we the viewers are no longer interested in his choices  (Although, we have begin rooting for the waitress who seems the most grounded of everyone.)

Perhaps, the cause of the 18 year difference between A Summer’s Tale’s European release and its U.S. release was that the film was simply not very interesting.

Or maybe I am missing something.