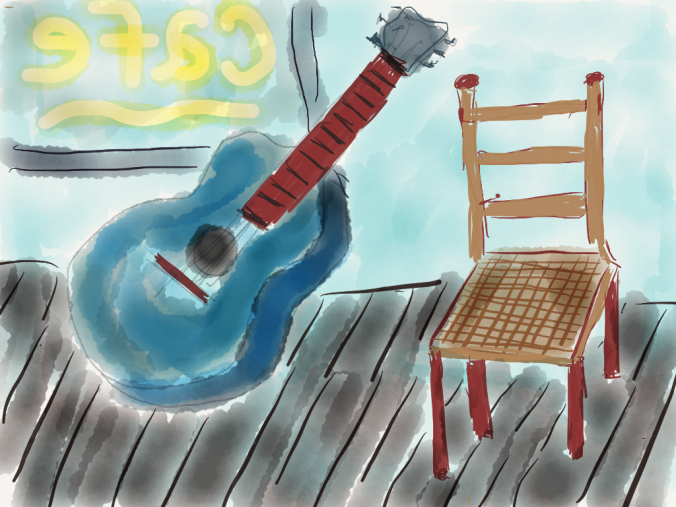 The Book Review of the Sunday New York Times this week (July 20, 2014) focused on contemporary poetry. It reviewed five books of contemporary poetry and featured an essay by David Orr entitled “On Poetry.”  The front cover was a whimsical drawing with archaic poetic terms such as “forsooth,”  “twas,”  “alas-alack”  and “thither” graffitied onto walls, suit jackets and boots. And on page 4, where the Book Review often introduces the matter of chief focus in that particular issue, there is a brief recap of New York Times’ poetry criticism through the years.

The four paragraph piece remembers the 1937 review of Wallace Steven’s  The Man with the Blue Guitar,  a review of John Berryman’s 77 Dream Songs in 1964, a 1975 piece on John Ashbery’s Self-Portrait in a Convex Mirror, and a 1981 review of Sylvia Plath’s Collected Poems (18 years after her death). And it was the review of the Steven’s piece that caught my eye.  The reviewer–Eda Lou Walton–stated that “the skill of these plucked and strummed-out improvisations proves him again the master of the most subtle rhythmical effects.”

And so of course, I had to pull from my shelf my copy of Wallace Stevens’ Collected Poems and looked to “The Man with the Blue Guitar.”  Actually the title refers to both a particular poem and the book in which it was contained.  The individual poem is the piece that attracted the world’s attention. It is a long piece, thirty-three sections of between four and sixteen couplets.  Stevens claimed that he was inspired by Picasso’s painting Old Man with a Guitar. (Later David Hockney would paint a series of works inspired both by Picasso’s painting and Steven’s poem.)

What is surprising is that the poem is so much more a “shattered” portrait than Picasso’s piece. Picasso’s Man with a Blue Guitar belongs (not surprisingly) to his Blue Period, but more importantly comes  several years before he is influenced by African art and–with Georges Braque–invents Cubism.  It is the cubism–and his art that follows–that is “shattered,” that most resembles the large schisms and small fractures running through society and which most resembles the world of Stevens’ guitar.  In fact, despite his referencing Picasso in the poem itself, it seems as if Stevens’ poem is more in tune with Hockney’s painting (impossible since it was painted in 1982, forty-five years after Stevens’ poem.)

The man bent over his guitar,
A shearsman of sorts. The day was green

They said, “You have a blue guitar,
You do not play things as they are.”

The man replied, “Things as they are
Are changed upon the blue guitar.”

And they said then, “But play you must,
A tune beyond us, yet ourselves,

A tune upon the blue guitar
Of things exactly as they are.”

And so, we have the “man with the blue guitar” refusing to tell things as they are–or perhaps unable to. Or is he implying that even the imagination, the creative faculty, is unable to depict “things as they are”?  Or is this phrase “things as they are” simply a coded phrase for the physical world–and guitar and the player are able to sing of what is behind that physical world. And yet his audience seems somewhat philistine–they are slow to understand. For them, “Day is desire and night is sleep” and “the earth for us is flat and bare/there are no shadows anywhere.”  And yet, we–and the player of the blue guitar–know that if nothing else, the 20th century has taught us that shadows are everywhere.

The poem has often been depicted as a tension between the guitarist and his audience, between the imaginative truth and the surface perceptions.  I believe it shows the failure of the audience to see deeper, a failure of the audience’s imagination.  Modern life–and this is surely not original with Stevens–is deadening and routine, and we need the players of the blue guitars to break us out, to center our focus on the more important things than mere survival.

Because of copyright issues, the entire poem is not available on line. (Though I am sure some clever computer user has found it somewhere.) But it is worth finding. It is a Whitman-esque explosion of images and thoughts and debate and sound.

I had forgotten about it–and about where and who I was when I first read it–and so am grateful for last Sunday’s paper which mentioned it a tiny corner of a large section. Sunday’s paper was the blue guitar that sent me re-reading and re-thinking.

Here are the first six sections of the poem:

I
The man bent over his guitar,
A shearsman of sorts. The day was green

They said, “You have a blue guitar,
You do not play things as they are.”

The man replied, “Things as they are
Are changed upon the blue guitar.”

And they said then, “But play you must,
A tune beyond us, yet ourselves,

A tune upon the blue guitar
Of things exactly as they are.”

II
I cannot bring a world quite round,
Although I patch it as I can.

I sing a hero’s head, large eye
And bearded bronze, but not a man,

Although I patch him as I can
And reach through him almost to man.

If to serenade almost to man
Is to miss, by that, things as they are,

Say that it is the serenade
Of a man that plays a blue guitar.

III
Ah, but to play man number one,
To drive the dagger in his heart,

To lay his brain upon the board
And pick the acrid colors out,

To nail his thought across the door,
Its wings spread wide to rain and snow,

To strike his living hi and ho,
To tick it, tock it, turn it true,

To bang it from a savage blue,
Jangling the metal of the strings…..

IV
So that’s life, then: things as they are?
It picks its way on the blue guitar.

A million people on one string?
And all their manner in the thing.

The feelings crazily, craftily call,
Like a buzzing of flies in autumn air,

And that’s life, then: things as they are,
This buzzing of the blue guitar.

V
Do not speak to us of the greatness of poetry,
Of the torches wisping in the underground,

Of the structure of vaults upon a point of light.
There are no shadows in our sun,

Day is desire and night is sleep.
There are no shadows anywhere.

The earth, for us, is flat and bare.
There are no shadows. Poetry

Exceeding music must take the place
of empty heaven and its hymns,

Ourselves in poetry must take their place,
Even in the chattering of your guitar.

VI
A tune beyond us as we are,
Yet nothing changed by the blue guitar;

Ourselves in the tune as if in space,
Yet nothing changed, except the place

Of things as they are and only the place
As you play them, on the blue guitar,

Placed, so, beyond the compass of change,
Perceived in a final atmosphere;

For a moment final, in the way
The thinking of art seems final when

The thinking of god is smoky dew
The tune is space. The blue guitar

Becomes the place of things as they are,
A composing of senses of the guitar.

(27 more sections yet to come)

3 thoughts on “Wallace Stevens’ “The Man with the Blue Guitar””