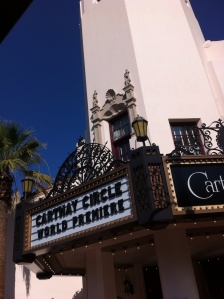 The Carthay Circle Theater where Snow White and the Seven Dwarfs premiered on December 21, 1937

I’ve been in Southern California for the past two weeks, and yesterday I spent 14 1/2 hours in Disneyland. With a very energetic seven-year old. And I’m completely exhausted.

But I am sure of this: no matter what people say about the Disneyfication of things, one has to admit that everything they do is efficient and entertaining. And often awe-inspiring.

When Walt Disney came to California, he focused on making short animated films, primarily the Mickey Mouse and the Silly Symphonies cartoons. But in 1934, he decided to produce the first feature-length animated feature…much to the dismay of his brother and business partner, Roy Disney, and the delight of the Hollywood critics who called Disney’s project “Disney’s Folly.”

For what sensible person, it was thought, would sit through a 90 minute cartoon?

Disney mortgaged his house, brought artists in to train his animators, emphasized a European look for the artwork ensign design, and spent close to $1.5 million in 1937 dollars to get his feature,  Snow White and the Seven Dwarfs, completed.

If Snow White and the Seven Dwarfs hadn’t succeeded, most of us probably would never have heard of Walt Disney–except maybe for a few film students who might have studied his early cartoons.  Instead the film’s success, both among the public and the industry, allowed Disney to capitalize on success after success until the Disney brand became what would have been unfathomable to Disney itself.

The story of the making of Snow White and The Seven Dwarfs is well documented: the switch from a rollicking tale about the dwarfs to the romantic love story it became,  the metamorphosis of the Wicked Stepmother from a hare-brained slovenly witch to the sensuous, shapely queen that all boys of a certain age remember, the downplaying of the prince’s role in the plot–this is all a matter of history.

But no one would have cared about that history, if the film flopped.

On December 21, 1937, the film premiered at the Carthay Circle Theater. The premier, which was attended by all the Hollywood royalty—Judy Garland, Charlie Chaplin, Marlene Dietrich, Cary Grant, George Burns and many more were present—was an extraordinary success.  Outside the Carthay Circle Theater, 30,000 fans who couldn’t get tickets waited.  The NY Times led with the line, “Thank You, Mr. Disney” and Walt Disney and his Seven Dwarfs were on the cover of Time a week later. (Disney always saw the dwarfs as the centerpiece of his film.)

A shot that Walt Disney wanted badly in the film

And the film made money. The numbers are staggering–within 15 months it had become the all time money making film ever–but more importantly Snow White and the Seven Dwarfs provided the seed money for what was to become the Disney Empire.

And so, as I trudged around Disneyland–visiting Radiator Springs and Ariel’s Undersea Adventure, as I watch Henson’s Muppets and a Broadway caliber Aladdin,  as I witness technological and creative boundaries pushed and optimized–I realize what an awful lot has blossomed from Disney’s hunch that people, yes, would sit through ninety minutes of animation.

Did you know that Snow White and the Seven Dwarfs was the first film to release a “soundtrack” album as a separate entity?