Fish-and-Chips at the Irish Times in South Philadelphia

A neighbor, a exuberant fellow from County Tyrone, told me about a new pub down in South Philly. It had, he claimed, the best pint in the city and fish-and-chips that were extraordinary. And so I made my way to the Irish Times. I’m not sure about the pint–I prefer my local’s–but the platter of fish-and-chips could have fed a family of four.

But there was something very familiar about the pub from the minute I walked in. Behind all the soccer regalia, the scarves, the jerseys, the posters, I recognized the place from an earlier time–it had a very odd, unique but familiar, two-level set up. Of course, I had been there before in an earlier incarnation, when it had been a good Italian restaurant. I had been there for Nick B.’s memorial.

By the early 90s, I had been to three AIDS memorials. All three were great celebrations and deservedly so. They celebrated the lives of three very special, very creative people. Nick B. was a graphic designer in the advertising agency I once worked in. In fact, he was often my graphic designer–or to be more exact, I was often his copywriter. He was kind and witty and funny and very talented.

When Nick contracted AIDS, he deteriorated quickly. The last time I saw him was about a week before he died. By then, he weighed about 70 pounds and had difficulty breathing, but still he tried to comfort us and keep us at ease. He still managed a smile, or maybe it was a smirk.

Anyway, a month after his funeral, his partner threw this wonderful party, a memorial to Nick. In a very real way, it was a joyous event, with many good people–his family and friends–celebrating a life well lived.

And now, once again, I was standing in the very space.

Memories came back slowly, not only of that night, but of Nick, of working with him and laughing with him.

So two days ago, on Wednesday, the Supreme Court of the United States struck down the Defense of Marriage Act, and with its two rulings gave married gay couples federal footing and paved the way for California couples to resume marrying. It was a great day for people everywhere. And a great day for people like Nick. Because now there is less reason to hide who one is, less reason for young men and women to feel that they are outside the pale.

Maybe this is the first large step in a much larger acceptance… maybe soon no man or woman will have to wait until they are dying to tell their parents who they really are.

It is a day to celebrate. 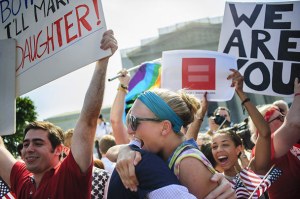 3 thoughts on “Fish and Chips, an AIDS Memorial, and celebrating the court’s decision”