HuluPlus is showing the entire “Criterion Collection” of classic films over the next 101 nights. My understanding is that the films remain available throughout that period, but a new one is added each night. This weekend I watched Francois Truffaut’s extraordinary debut film, The 400 Blows (1959). Shot in black and white with Hitchcockian lighting (Truffaut idolized Alfred Hitchcock and wrote the definitive study of him, Hitchcock), the film follows the plight of a young 12-year old boy as he moves from trouble in school to trouble at home to a juvenile detention center. 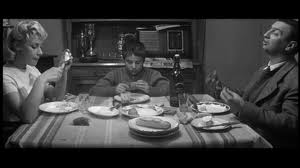 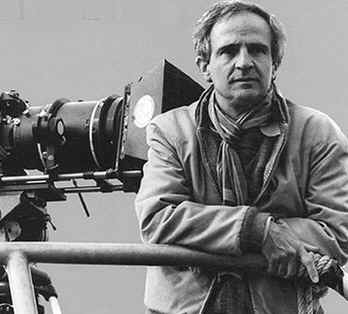 Young Antoine Doinel (Jean-Pierre Léaud) is scapegoated by his domineering teacher, brushed aside by his preoccupied parents, and disregarded by most of the world around him. The teacher has so stereotyped him that he cannot see the sensitive, impressionable boy within; his parents are bothered by his very existence. After several episodes involving both school and home, he runs away. His first night is spent in a vacant printing plant; his meal–a quart of milk that he has stolen. His next nights are spent hiding in a friend’s house where the two enjoy the freedom of the city–playing hooky from school, shooting pea-shooters at passersby from a tall window, smoking cigars, and going to the movies. (Indeed, movies are a big part of Antoine’s life as they were for Truffaut himself, on whose childhood this film is loosely based. Perhaps the happiest moment in the film is when Antoine and his parents go out on the town to see a movie. The boy is visibly entranced.)

After Antoine steals a typewriter from his stepfather’s office, he finds it difficult to hock, and so returns it. It is in returning it that he is caught by the night-watchman. His stepfather hands him off to the police where he is charged with theft and vagrancy. Antoine spends the night in a holding cell with a thief and three prostitutes, is transported with them to a larger jail, and then off to a juvenile “observation center.” While this is going on, we see his parents cede responsibility to the authorities; they have given up on him. (The scene of Antoine in the back of the police coach watching the bright lights of the Parisian night go flitting by is perhaps the most poignant in the film. When the camera closes in on Antoine’s usually stalwart face, there are big tears rolling down his cheeks.)

In the observation center, we learn more about Antoine’s life through his interviews with the center’s psychologist. Finally, during a soccer match, Antoine sneaks under a fence and escapes to the sea. The film ends with him on the beach, between ocean and land, staring enigmatically at the camera. We are left to wonder whether he stands there between childhood and adulthood? Between a life of crime and a life of productivity? Between a world of misery or a bit of joy?

The performance of the 12-year old actor, Jean-Pierre Léaud, is unforgettable. More through his expressive face than his spoken words, he reveals a quiet strength developing around his innocence and fragility–the strength that will propel him forward rather than downward. In fact, Antoine is simply the featured child in a film with countless children’s faces–faces that are trusting and bruised, filled with elation and terror, marked by both wonderment and a premature world-weariness. Children in the classrooms, in movie theaters, in the playground, on city streets. There is a scene where a group of children are watching a puppet show. The camera stays focused for a good while on the varied and wonderful faces of the children watching. In a way, it is a heart-wrenching scene, for one cannot help but wonder, as we watch Antoine grapple with his fate, what will become of them all.

Léaud continued working with Truffaut, making four other films with him and playing the same role, Antoine Doinel, in the progressing stages of his life. But it is in The 400 Blows that the young actor and his director most closely capture movie perfection.