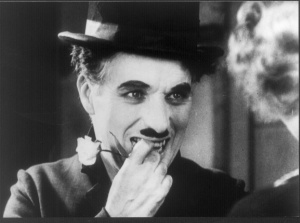 I began showing City Lights to my students last week. It is for my “Literature and Film” class and while I don’t necessarily have a “literature” to couple with,  I think it is a film that everyone should see.

In fact, I believe it is one of the finest movies ever.

(The AFI ranks it as number 76 of the 100 best American movies of all time. Chaplain’s  The Gold Rush is ranked two slots before it at 74 and his Modern Times several below it at 81. Chaplin leads all directors with having three in the top 100.)

Yet art is not a contest. And City Lights is pure art.

Most of my students have never seen a movie in black-and-white! And they immediately say (and moan)  that they have never seen a silent movie. Yet, City Lights is not a silent movie. Chaplin made the movie well past the advent of the “talkies.” He chose silence for his “Little Tramp” because giving him a voice–and a language–would impair his universally beloved appeal. In speaking no language, the Little Tramp belonged to all languages. And so Chaplain dubbed City Lights a romantic pantomine.

But it is false to state that it is a silent movie.  There is a omnipresent score (written by Chaplin) as well as several moments of sound. In the boxing ring, the bell signalling the end of a round clangs time and time again–the rope pulling the bell is tied around the Little Tramp’s neck and every time he hits the floor the bell sounds. An opera singer’s performance at a high society party is disrupted by the piercing whistle that the Little Tramp has inadvertently swallowed. And perhaps the best of all is the nonsensical sounds that emit from the braying politician and socialite at the film’s beginning.  Chaplin did not suffer fools easily and pompous power brokers are a large and easy target. (There is a series of holiday Charlie Brown television specials here in the States and in them all the adults speak no language; they simply bray these “wah, wah, wah” sounds.  I have to wonder if they picked it up from Chaplin’s City Lights.) 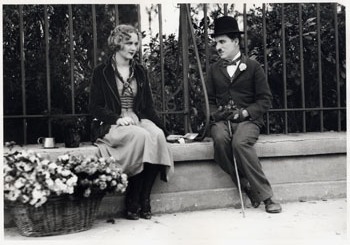 But aside from the superb technicalities, the dramatic lighting, and the slapstick choreography, what anchors the film and raises it above mere madcap film-making is the story itself.

The Little Tramp has fallen in love with a blind flower girl, and she with him, but she mistakenly believes he is a millionaire. (When we–and Charlie–first meet her, a fleet of fancy cars had just pulled up to where she sells her wares. She believes that Charlie belongs with them. Several other coincidences add more credence to her misunderstanding.) As the story moves forward,  Charlie goes to great lengths to get her money not only to avoid eviction but to take part in a experimental cure for blindness, and his efforts finally land him in jail.

By the time  he is released from prison, she is cured. She can see.  And yet the rich prince she had imagined as her benefactor is a far cry from the Little Tramp she notices at the end. The scene where this is discovered has been called one of the high points of movie making.  The acting is all in the face. It is subtle, internal and real. (see the picture at the top of the post, look at Chaplain’s eyes, imagine what he is thinking.) And it is very hard not to beome a little teary when viewing it. It is not cloyingly sentimental–and it very well could have been. It is perfect.

The Little Tramp was a masterful creation. Always gentle, polite, and kind, he often acted as a foil to the crassness and cold-heartedness of modern life. From his position at the bottom of the social ladder, the Little Tramp sweetly pointed out the foibles of those above him.

Here is a delightful clip from the movie Chaplin in which Chaplin (played by Robert Downey, Jr.) creates the character of “the Little Tramp.”  Enjoy.