As one travels towards the end of North Beach in San Francisco, just before entering the financial district, there is a distinctive building on the corner of Columbus and Kearney. Its iron sheathing has been oxidized a gentle green color and, in a way, it resembles an ornate version of the Flat Iron Building in New York.

The building houses the offices of Francis Ford Coppola. Aside from the production duties, the writing, and script doctoring, it is here that Coppola does all his film editing–where all the Godfather movies, Apocalypse Now, Dracula and so many others were edited.

It is also where the literary journal Zoetrope: All Story is produced.  The journal presents some of the finest in contemporary fiction and one-act plays and has featured such established writers as David Mamet, Don DeLillo, Andrew Sean Greer,  Margaret Atwood, Salman Rushdie, Woody Allen,  Neil Jordan, and Haruki Murakami. (Full disclosure: I had submitted once when the magazine first started up, not realizing I was so far out of my depth.)

And on the bottom floor is the Zoetrope Cafe, an Italian bistro, featuring an Old World menu and, not surprisingly, a large selection of Coppola wines.

So last night, we stopped in for a nightcap. 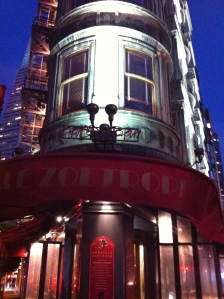 I noticed what I wanted on the shelf immediately. The whiskey was poured into the most unusual bar glass I’ve ever seen. It was more like a “petri-dish” than a drink glass, about an inch and a half-tall and 4 inches wide.  We asked if the barkeep had ever met Coppola, and she said she did for the first time that day. He told her to call him “Francis” which she said she was still a bit uncomfortable yet to do.

There were copies of Zoetrope in a corner so we brought a couple to the bar and began leafing through them when the bartender came back and with a jerk of her head whispered, “There he is.”  Coppola was chatting with the hostess, looking as if he was going over the wine stock.  About fifteen minutes later, he called to his wife who had been sitting in the corner next to us and they left the cafe, getting into an ordinary SUV.

I had seen the poet Lawrence Ferlinghetti the day before and now Francis Ford Coppola this night, and there was so much I would have liked to ask them both.  But their celebrity is mostly in our minds only–their audience.  They, themselves, must go through their days and nights much like you and I, and the intrusion of strangers certainly must be tiresome. At the same time, it is also good to see these literary/cultural lions in their daily routine–to see them simply as working men, no different than the rest of us.

Still, I would have loved to have bought another whiskey, offered each a drink, and listened to what they had to say.

6 thoughts on “A small whiskey, the Zoetrope Cafe and Francis Ford Coppola”