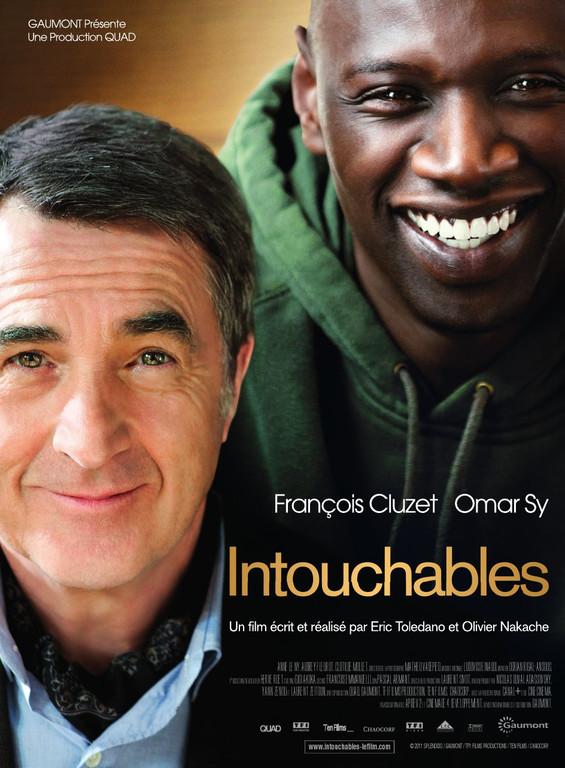 This is, without a doubt, the most enjoyable movie I’ve seen in a long time.

Two men, from vastly different backgrounds, form a relationship that is simply a delight to watch.

François Cluzet plays Philippe, a very wealthy business magnate who is now a quadriplegic after a para-gliding accident.  Omar Sy plays Driss, a Senegalese thug who lives in the Parisian projects and who becomes Cluzet’s live-in nurse.

The story line is predictable. Driss gets the job, bristles initially at some of its requirements, is overwhelmed by the luxuries of his new world, and rubs up against the expectations of his new boss. Phillipe, on the other hand, admires his new nurse’s honesty and his love of life. By movie’s end, they are very close and very good for each other.

So if the plot is predictable, what is it about the movie that has made the second most popular movie in the history of France film-making? It is the perfect combination of Omar Sy’s over-the-top acting and Cluzet’s subtlety.  Cluzet, because of the physical handicaps of his character, must do all his acting through his face–and his enjoyment of Sy’s infectious joie de vivre is more than obvious.

Sy, on the other hand, dances, mugs, flirts, mimics, and roars laughing–in the rarefied environs of salon receptions, opera boxes, and art galleries.

Driss “pimps” Philippe’s motorized wheel chair so it can go 12 km/hr; he joyfully shares with Cluze the joints he is always carrying around; and in the end, he makes him face his greatest fear.

The chemistry between the two actors (and the two characters) is more than charming, and Sy’s relationships with the people around him–Philippe’s  household staff, Philippe’s daughter and her boyfriend, his own extended family in the projects–are both comical and touching, as well.

Based on a true story, Intouchables shows two men, from worlds as different as possible, becoming better human beings because of the presence of each other.

In writing about the film, it is all too tempting to give in to cliché:  It is a buddy movie like no other, a “feel-good” comedy, a lovely entertainment.  But the clichés should not take away from the truth.  Intouchables is in fact a very good film and thoroughly enjoyable from the beginning to the end

As I walked out of the theater I immediately texted a friend to tell him to be sure to get down to see it before it leaves the theaters. I can’t remember when I last enjoyed a movie as much.