It used to be when I thought of Scandinavia, I thought of crystal-blue fjords, aromatic forests, statuesque blondes, and a palatable wholesomeness.

That’s before Stieg Larson gave us his girl with the dragon tattoo, and Jo Nesbø, his various riffs on Scandinavian violence.  Now when I think of Scandinavian, it seems a place of outrageous torture, imaginative violence, and not a little repressed fascism.

Headhunters (Hodejegerne) is Mortin Tyldum’s adaptation of Jo Nesbø’s slick, stylish novel of a professional headhunter who is also a major art-thief.

Roger Brown (played by Aksel Hennie who has a striking resemblance to a young Christopher Walken) is a very successful headhunter–he brings talent to very powerful and influential corporations.  In interviewing potential clients, he discovers their routine, the artworks they own, and whether they have a dog.  In this way, he is able to case his next heist in the luxury of his offices. Roger tells us that he is only 1.6 meters tall (about 5’3″) and that he has to “compensate.”  He does this by buying his stunningly beautiful wife (Synnøve Macody Lund ) everything he thinks she desires: A house right out of the glossiest of architectural magazines, expensive and rare jewelry, an art gallery to run.  He can afford none of this–which is why he must steal art, and even that income is proving to be too little.

We begin by seeing him steal a lithograph by Munch.  (Is it just me or is Munch the most stolen artist of our time?  I don’t know how many versions of The Scream have been stolen in the past thirty years.)  Anyway, the print that he steals is called “The Broach” but it looked very much like one of Munch’s Madonna paintings. 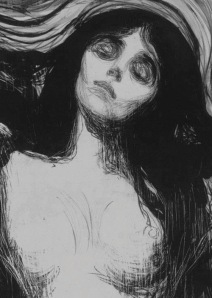 But even the Munch is not enough to silence Roger’s creditors, so he has to go after a really big score–a long lost Rubens that is in the apartment of a man who he is recruiting for a major position.  In the interview, we learn that the man, Clas Greve, (Nikolaj Coster-Waldau) is a former mercenary, a world expert at tracking people and deposing of them–aha, the plot is setting itself up. He is also ruthlessly ambitious.  We also soon learn that he is sleeping with Roger’s wife.

I will not spoil how it all plays out except to say that there is an enormous amount of bloodletting and creative violence. We move from Roger’s sleek house to Appalachian-like cabins, where the patina of civilization has been long ripped off.

Headhunters is very taut, fast moving, and exciting.  It works very well as a slick thriller, a clever heist movie, with surprising twists and tense, rapid moments.  It also aspires, it seems, to be a good-old-fashion “slasher movie.”  This is where it fails.  The blood is overdone.

And along with trying to be a heist movie, a thriller, a slasher-movie, it also makes periodic stabs at being comedic.  There are very fat twin cops protecting Roger’s hospital room who bungle everything–although their very large size might be what saves Roger’s life.  There is a nonsensical bit with a Russian prostitute and Roger’s partner in crime (which has to be introduced for a technical reason, but it is mostly nonsensical and more irrelevant than essential.)  Heist, thriller, slasher, comedy–perhaps Tyldum is trying to juggle too many balls at once.

In truth, however, Headhunters is a very good way to spend an hour and forty minutes.  Fast-paced, handsome, and clever, if it does nothing else, it is sure to drive more people to reading Jo Nesbø.  And that’s a good thing.

Check out the trailer below: