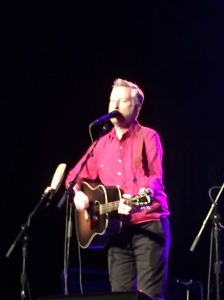 As often is the case, my neighbors brought me, convincing me that it would be well worth going out on a “school night,” particularly given our current election season.

And they were right.

There has been a lot of momentous “politics” in the past year. Bragg apologized to the audience for his own country’s “Brexit” vote in June. (I had seen the novelist Ian McEwan the previous week who also apologized to the audience for the Brexit vote.) Bragg told us that few could foresee what would ultimately result–that most voters found the entire Brexit campaign an annoying nuisance which would right itself when the vote was finally counted.

They all were horribly mistaken.

Semi-jokingly, he stated that what Britain also lost with the Brexit vote was its “moral superiority” over the U.S.’s electoral process. However, he warned, they could gain it right back in November. And with that, he began singing his classic “Accident Waiting to Happen.”

The message was clear.

There has been a lot of fun this year at the bizarre nature of the current election campaigns. Comedians are having a ball, and water cooler conversation is more about the latest Bill Maher piece or Steve Colbert rant than anything of substance. And that might be merely because we are simply following the lead of those who want to be our leaders. It has all become performance. (The SNL season premier this week [10/1/2016] was priceless in its political skewering.)

And yet, Bragg was cautiously optimistic.

Billy Bragg, for those who don’t know, is a singer from Britain who throughout his career has taken up a variety of causes ranging from the miner’s strike during the Thatcher reign to the current refugee crisis. He is very firmly planted to the left of the American Left.

He remembered that when he first toured America, it was 1984, the “Reagan years.” No way then, he recalled, could he have anticipated that a man who labels himself a “Democratic Socialist” would be considered a major contender for the presidency in 2016.  And for that he is hopeful.

He feels there is a hopeful momentum, but a momentum that can be stopped by “he who shall not be named” as he referred to Donald Trump.  His defeat he believes is as important a vote as any the American public has faced.

And he asked us not to make the mistake that the British voters made with Brexit, not to believe that the unthinkable cannot happen.

And then he played some wonderful and thoughtful music.