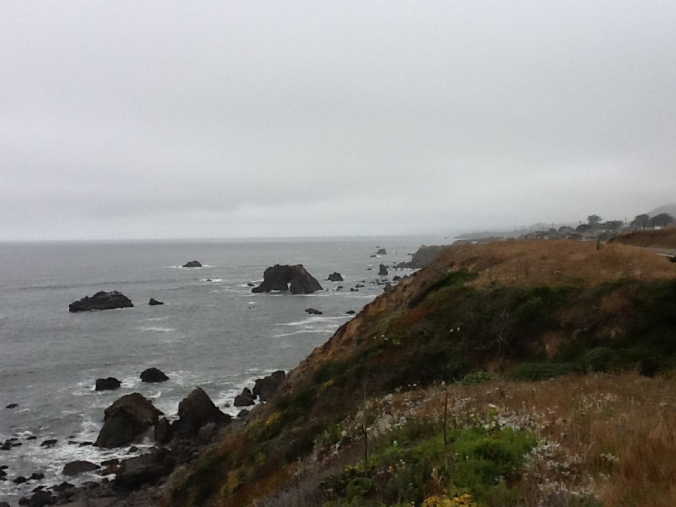 I am not the first to make the comparison between the Pacific Coast Highway in Northern California and Ireland. But that doesn’t make it any less true. It is a magnificent landscape, full of crashing surf and rock-strewn fields, dramatic cliffs and rolling mountains. The hills are more “golden” than green, and the roadways have much fewer sheep and doubledecker tour buses, but yes, it very much reminds me of the west coast of Ireland. Every turn in the corkscrewing highway offers another extraordinary vista.

But it is Goat Beach which is perhaps the most memorable. Goat Beach sits where the Russian River meets the Pacific Ocean. In July the river flow is feeble, but it is then–between March and July–that the area is a breeding ground for sea lions.

By July the sea lions have already pupped and the adult ones seemed quite tired. At first, it is a bit jolting to see twenty to thirty adult sea lions asleep by the rivers edge. It looks as if they have all been slaughtered. But then a fin rises to slap a companion or another waddles to find a more comfortable position. They are just resting–and continue to do so for the rest of the morning.

But the seal pups are another story. Frisky and active, they plunge into the crashing surf of the Pacific or slide into the muddy waters of the Russian River. There is something fascinating about these creatures: their sleekness, their eyes, their movement. 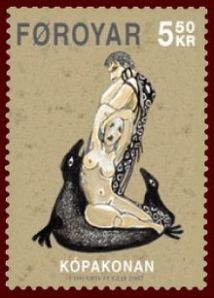 A stamp from the Faroe Islands featuring a selkie emerging from her skin.

Seals and sea lions have long played a part in Norse and Celtic myth.  The legend of the selkie is perhaps one of the most famous and there are a wide variety of stories about them.  These creatures are seals when in the water but humans when they go upon land and emerge from their sealskin. And while there are numerous variants on the stories, there are basically two version of the selkie myth: one female, one male.  The female selkie is often a beautiful woman who is  “captured” by the man who finds her, unable to return to the water because the man has taken possession of her discarded skin.  The male selkie is also renowned  for its beauty and charm when it comes upon land and sheds its skin, and he is often noted for his ability to satisfy the unhappy and dissatisfied women of the area.  Fairly often, these women bear his children, usually children with some sort of “deformity” or oddity about them. These women too are in possession of the creature’s skin.

I can immediately think of two wonderful movies that deal with this myth.  One, is a 2009 film, Ondine, featuring Colin Farrell (and my personal favorite actress Dervla Kirwan from Ballykissangel)  and the other is an older film from 1994 called The Secret of Roan Inish.  Both are well worth finding, however you find your movies these days. And both deal with the female version of the story.

Anyway, so I am reading The Guardian online this winter and I come a cross a video of the Scottish poet Robin Robertson reading his poem “At Roane Head.” It is a powerful poem, and perhaps the most powerful reading I have ever witnessed. In it a woman cares for her four children. Her drunken husband has disowned them–for they have seal-like characteristics as well as human. At the tragic end, the woman returns the seal skin to her lover.

Here is the video.  Give it a view–I find it very powerful.