Ocean City, New Jersey cannot be happy that they allowed Girl Most Likely to use it as location, for the directors, Shari Springer Berman and Robert Pulcini, paint this quaint, South Jersey town in a trashy, rusty, tone that is so opposite to the quaint, well-kept, South Jersey resort that it is.  It is as if they wanted a “Jersey Shore” vibe and settled on the first town they found named on a map. Except they chose one of the most conservative, upper-middle-class, dry towns, and they didn’t know it.

A hint that they truly didn’t know the locale happens early when Lee, Darren Criss’s character, is filling his car with gas as he prepares to drive to New York.  I saw the film in Philadelphia, and everyone in the theater noticed the gaffe: New Jersey does not let drivers pump their own gas! (It must be done by an attendant and it’s a good 20 to 50 cents cheaper than Philly’s stations.)

But aside from their missing the mark with the location–which only a small proportion of the audience will recognize–Girl Most Likely is a likeable film that doesn’t seem to know what it wants to be: is it a “small film” or a large entertainment? It can’t be both.

Imogene (Kristen Wiig) is an aspiring playwright in New York. She had won some recognition as a young woman, but ten years later she has produced nothing. Through her boyfriend, she travels in the rarefied world of women who chair charities, wear simple black dresses, and sharpen their talons on their preposterously large diamonds. Although they tolerate Imogene’s company (because of her boyfriend), they look down their noses at her because she is, after all, (gasp), from Jersey. 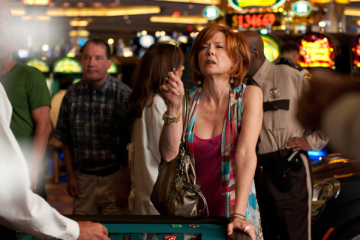 When her boyfriend leaves her, she fakes a suicide attempt in the hope that he will save her and come back to her. Her plan backfires, and, instead, she is given in custody to her mother  and driven to New Jersey. Her mother–the wonderful Annette Bening–is a casino habitue, an ex-go-go dancer, living with a shady CIA agent (Matt Dillon) who has told her children that their father died twenty years ago rather than saying that he simply left her.

When Imogene comes home, she learns that her mother has rented out her room to a handsome casino performer (Chriss), her brother’s social anxiety is getting worse, and her father isn’t really dead as she has believed for all these years.

The arc of the plot is familiar. Angry about being in New Jersey and not in “glamorous” New York, appalled by her mother and her life-style, and shattered by the news of her idolized father’s existence, Imogene grows to learn how wrong she is in so many ways.  After lurching from one disappointment to another, from one shredded dream to the next, Imogene finally realizes her talent, embraces her family, and “lives happily ever after.”

While the film is inconsistent at times, it is propped up by some memorable performances:

Christopher Fitzgerald plays Imogene’s brother Ralph, who bordering on the autistic, is more comfortable with crustaceans than with people and has constructed a bullet-proof, wearable, snail shell into which he can retreat when he needs protection from the real world.  But he is wiser than his sister and more tolerant of the quirky household that their mother has assembled.

Matt Dillon plays a CIA agent (“Is he or isn’t he?” we wonder throughout most of the film.) with the name of George Bousche.  We have seen Dillon play this character before, over-the top, mildly threatening and unbalanced, and oddly mysterious.

Annette Bening looks like she is having fun playing trashy, but when her character has to show depth and anxiety she demonstrates why she is one of America’s finest actors.

Kristen Wiig is loveable and confused and vulnerable and frustrating. She seems, however, ten years too old for the character. We are used to seeing late twenty-somethings struggling with identity, purpose, and life; it is a bit off-putting to see that same struggle played the same way ten years later.

Light summer fare, Girl Most Likely, is too frothy to deal with the subject it seems to want to address: class distinctions and presumptions.  Imogene’s father is a pompous prig, her New York girlfriends are two-dimensional caricatures and her condescending attitude towards Lee, Chriss’s casino performer, is brutal and unfair. But the film simply does not have enough weight to go there.

Like a night of summer fireworks, Girl Most Likely is enjoyable but easily forgotten.