About Time is largely advertised  as being from the makers of Notting Hill, Love Actually, and Four Weddings and a Funeral. And the film nods politely to all three of its ancestors.  Notting Hill and Four Weddings and a Funeral were carried by Hugh Grant’s bumbling and boyish charm, and Love Actually by Bill Nighy’s performance as an over-the-hill rock-singer, as well as a packet of sweet and moving love stories.

About Time capitalizes on both.  Like Hugh Grant, Domhnall Gleeson is all boyishness and sweetness and bumbling good will. Without the classic handsomeness of Grant, Gleeson’s is a more affecting, more real character. The same can be said of his love interest played by Rachel McAdams. Her simple beauty is open and fresh and void of Hollywood sheen. And together they make a couple we might know, whom we like and root for.

But it is Bill Nighy who anchors the piece.  Has Nighy  become the go-to-guy when someone needs a somewhat eccentric, aging British male, who is always ready to give the finger to the establishment and to all that it expects of him?  If so, he does it wonderfully. (See his character in Love Actually, Pirate Radio, even the Last Marigold Hotel).

At first, the plot sounds a bit of a stretch–on New Year’s day of his 21st year, a young man Tim (Gleeson) is told by his father (Nighy) that the men in their family have the ability to travel in time. This is not H.G. Wells science-fiction stuff, however, simply the ability to return to a moment and correct any faux pas that one might have made.  You know those moments that only after they have passed do you realize what you should have said, should have done? (The French have a phrase for those moments–l’esprit de l’escalier.)  Well, what Tim’s father is giving him is the chance to always go back and say or do that right thing, make that suave gesture, deliver that saving grace.

Dubious of his father’s newly shared secret, Tim tests his new power immediately by returning to the previous night’s New Year’s Eve party where he had slighted a young woman at midnight (a slight that had him tossing in his sleep all night long.)  He is able to correct what happened and is rewarded by a smile on the young woman’s face where there had once been pain.

The remainder of the film follows Tim as he courts Mary (McAdams), prevents disasters for his roommate, and tries to save his sister’s descent into a damaging and abusive relationship.  His attempts are charming and amusing–his first night with Mary is filled with many “do-overs” until he has it down perfectly–and the goodness and sincerity of his wishes are heartwarming. 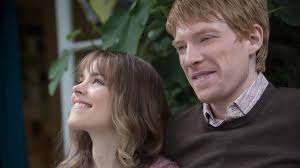 But it is the eminent death of his father that is the most poignant.

Moving seamlessly from a cute romantic-comedy to a poignant examination of fatherhood and family, About Time surprises us with an emotional wallop that we weren’t really prepared for. But it works perfectly.  The father’s last request of sharing a time-travel with his son is beautifully filmed and presented.

Richard Curtis’s films are regularly sweet confections, mixed with a comforting dollop of poignancy. (Who could forget the recitation of Auden’s “Funeral Blues” during the one funeral in Four Weddings and a Funeral?) With About Time, Curtis has perfected his style. It is a funny, romantic and sweet film…but what separates it from the rest of the pack is a certain emotional sophistication.

I think it is a beautiful film.