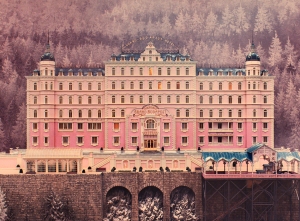 Towards the end of Wes Anderson’s latest film, The Grand Budapest Hotel, the elderly Moustafa (played by F. Murray Abrahams) says this about his mentor, the concierge M. Gustav H.:

“His world had vanished long before he entered it. But he sustained the illusion with a marvelous grace.”

And this reminded me of Cary Grant.

I saw three movies this week. And oddly–and not purposefully– they dovetailed into a similar theme.  I was sick as a dog in the beginning of the week and so, lazing around, I  watched two films on television.

The first was To Catch a Thief.  How gloriously campy it now seems.  Cary Grant’s ascots alone are only outdone by the sweet innuendos that he and Grace Kelly ad-libbed with Hitchcock’s permission.

Cary Grant in To Catch a Thief

It is all pure fantasy. Pure illusion.

One time, when Cary Grant was told by an interviewer that countless men would love to be “like Cary Grant,” he replied that so would he.  For he knew it was all illusion: the sophisticated banter, the artless seductions, the calm equanimity.  It was his job, being Cary Grant.  In the end, Grant ultimately left the movie business when the illusion gave way to reality. His type of character–as unreal as it was–was no longer in fashion in the gritty, realism of modern cinema.

A few days later I watched Woody Allen’s Midnight in Paris. The entire movie is built on illusion, one that we all suffer from. The plot deals with the idea that we all believe that an earlier time was more exciting, more inspiring, more fulfilling.  The fallacy of the belief is wonderfully depicted, as Owen Wilson’s character–Gil Pender–returns to the 1920s and falls in love with a beautiful woman whose dream is to live in the 1890s. Even in the presence of his literary and artistic idols, Wilson’s character comes to realize that the past is painted with gold dust and that our image of that past is greatly unreal. 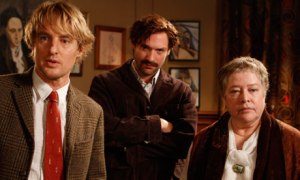 And in the end, it is all illusion. Many of us believe that another time was better than the one we live in. And some believe that, if only, they had been born at a different time their lives would be so much different–and better. (At this point read, E. A. Robinson’s poem “Miniver Cheevy” which is referenced in the film as well.)

And so, I finally go out and go to the movies and I see Wes Anderson’s The Budapest Grand Hotel.  It is a beautiful movie to look at and the performances of Ralph Fiennes and his young protege, Tony Revolori, are extraordinary.  But it too is all illusion. The world it describes is long gone, if it ever existed at all. And the heroism of the film–if it can be called such–is that Fiennes’ character maintains the illusion that that world still exists, still matters. And we are even more removed from it than he.

And after all that is what movie making is about.  Sixty years ago, Cary Grant left movie making because he believed the magic had left, that hard-nosed grittiness had blown the magic away.

But that is not the case.  Most of the time, we still go to the movies for the magic. Whether it is the unreal pleasures of the moneyed classes in Monte Carlo or the time-tripping adventures of a sincere romantic in Paris, the movies still provide a good dollop of magic. And in The Grand Budapest Hotel all that magic comes full circle. For not only is the set and the landscape and the costumes and the cartoonish villainy not part of our real world, but even the characters themselves are clinging to an illusion, to a world that has longed passed, but which in our “Golden Age” memories is a thing of refinement, class and excitement…more civilized world than the one we know.

Towards the end of Midnight in Paris, the main character Gil (Owen Wilson) suggests a movie idea to a young man accompanying Salvador Dali. The man (played by Adrien de Van) was Luis Buñuel, the Spanish filmmaker and poet who caused a outrage with his first two films, Un Chien Andalou (1928)  and L’Age d’Or (1930), both collaborations with the surrealist painter, Salvador Dali. The latter film was banned for nearly 50 years before it had its premier in the U.S. in 1979.

(By the way, the movie that the Owen Wilson character was suggesting was Buñuel’s The Exterminating Angel.)

Buñuel and his compatriot Dali were at the forefront of surrealism and, while their artistic vision was not embraced by everyone, both men practiced their art well into old age.  And while the difficulty of surrealism coupled with Buñuel’s savage attacks on the bourgeoisie and on religion might have distanced himself from much of the mainstream audience, he was quickly seen as a seminal figure in film and one of its greatest directors. His films won or were nominated for major awards throughout the world.

Both his anti-religion and the anti-bourgeoisie attitudes are in full display in Buñuel’s 1972 film The Discreet Charm of the Bourgeoisie. And of course, the entire film is surreal. 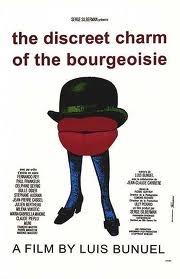 While plot has never been the most stringent part of Buñuel’s films, The Discreet Charm of the Bourgeoisie focuses on three couples and a series of quirky events and odder dreams that continually prevent them from dining together. There is also a Catholic bishop who asks to moonlight as one couple’s gardener. (It is typical of Buñuel that the bishop performs the most brutal action in the film.)

There are gentle stabs at the military, the police, and the upper-middle-classes, but overall the film is relatively light–at times even farcical. Etiquette is important to the three couples–and propriety–despite the fact that the men are drug smugglers and their life style is founded on drug money. They talk about the proper way to drink a martini and bemoan the fact that the lower classes do not know how–this they see as evidence of the downfall of society. (They use their chauffeur as a test case.)

Throughout the film, dreams occur within dreams within dreams…and at times we forget that some of the situations the characters find themselves in dissolve upon waking. And the dreams themselves get increasingly brutal. There are various ghosts and visits to the underworld and dreamlike violence.

And all these well-to-do people want to do is eat a meal together–and they can’t…a rare event for people who are used to getting everything they want. Life–as surreal as it can be–gets in the way.

The original title for the movie was Down with Lenin, or The Virgin in the Manger (A bas Lénine, ou la Vierge à l’écurie) and was changed to The Charm of the Bourgeoisie.  Adding the word Discreet was an afterthought.