I went to see a band tonight down at a local pub, The Dark Horse, known more for soccer clubs and televised soccer games than for music. But some friends of mine are in this band and I had to see them.

I have played with two of the members before in an Irish band, but this new band, The Flashbacks, is just that …a flashback to several decades earlier.  The band started out as a Beatles cover band, but then expanded with a lot of Steely Dan, Yardbirds, Stones, Kinks, before settling into CSNY, Beach Boys, the Dead, Eagles, etc. (They tout themselves as the second British Invasion, but they cover a fair amount of  American bands as well.)

And the reason they can cover this music is that they are DAMN GOOD!  The harmonies are precise–three-part most of the time–and the musicianship is impeccable.  They are seasoned players who have, for the most part, known each other for a very long time and they play to each others’ strengths and build on it. The youngest member–Joe Manning–is just a pup compared to the others, (he wasn’t born when these guys first started playing together) but he is one of those wunderkinder who can play anything and play it with perfect beauty, wit and definition. If he had been alive forty-five years ago, they would have called him a god.

And so this got me to thinking….

There are an awful lot of very talented people out there. I could go see scores of really talented bands or individuals every night of the week in my city alone.  Multiply that by every other city, burg, town. How many great musicians are there in Dublin? Edinburgh? Berlin? London? Madrid? Cairo?  Innumerable.

Luck, certainly plays a role, but a very minimum one.  Being at the right place at the right time, meeting someone who can truly help, etc. are all fortunate but are not the thing that separates the very good from the great.  And mere technique is not sufficient–there are thousands of technically gifted people.

I believe it is focus, focus on one’s calling at the expense of all else. 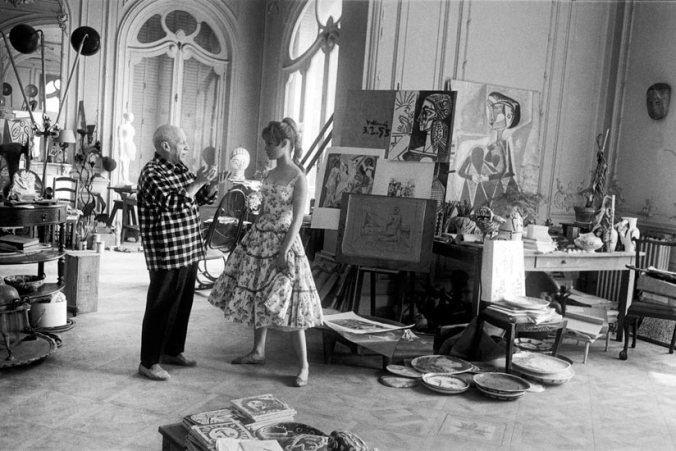 Picasso and Bardot. How great is that?
re-posted from http://weekendspast.com

I remember having a discussion with my father once. He was bemoaning the way that Picasso treated women, discarding them indiscriminately whenever it suited him. I argued that it was a symptom of his genius. (He challenged my assumption that Picasso was a genius.)  Genius, I said, uses everything it comes across. There is nothing else that matters but his or her art, his or her genius–other people and other people’s emotions included.

The attitude can be summed up in the clichéd saying “It’s his (her) world, we’re just living in it.”

Who else has stepped on everyone to further their art–or in the furtherance of their art?  We could cite both Shelley and Byron, who stepped on and used everyone in their belief in their own genius and the entitlements it should deserve.

But this is not only in the arts.  Steve Jobs may have been a genius but he was hardly a likeable person. And Bobby Fischer, arguably the greatest chess player ever, became more than simply an egocentric genius. He became a misanthropic, hate monger.

Mozart–a man who could create entire operas in his head without touching an instrument–was certainly egocentric, almost to an infantile degree.

So what about all your acquaintances who are truly talented, gifted people? Is it that they are decent human beings whose company you enjoy, whose interest in you and others around them is obvious, that keeps them from reaching the pantheon of genius.

And would you have it any other way?  I know I wouldn’t!  I too much enjoy the people who are creating wonderful, beautiful things–like the middle-aged Flashbacks at The Dark Horse pub–and who are still wonderful human beings, interested in the world and the people around them.

The etymology of the word “amateur” comes from the word Latin word “amat” –to love. Whether one is paid or nor, celebrated or not, it is the love of doing, making, performing something that is good and beautiful that makes for a better world.

I’ll go see the Flashbacks, the next time they play!