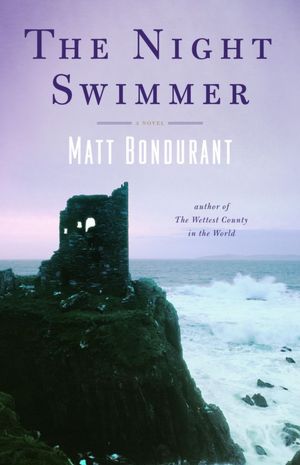 A goat that walks on its hind legs…a woman who swims in the dangerously cold North Atlantic…hallucinogenics…two Irish pubs…a violent underworld…a blind goatherd…a dubious fiddler…9/11…an ancient tragedy.  These all are elements that come together in the magnificent novel The Night Swimmer by Matt Bondurant.

I wrote about this novel in an earlier blog; I had only been a few chapters in at the time and was focusing on the urge to live somewhere else. Indeed, the examination of this urge is part of the narrator’s train of thought. But I had no idea where this story was going and how vividly it would be told.

The novel is about an American couple who move to Ireland, when the husband wins a pub in the town of Baltimore in southwestern County Cork. The husband has aspirations of writing and feels that the pub will give him ample time and material to do something great. He certainly has both–but is unable to fashion anything with it.

The woman–the narrator–has an rare skin condition, a subcutaneous level of fat, that allows her to withstand extremely low water temperatures. She is an open sea swimmer and the move to Ireland allows her to revel in this activity, in water that is frigid and dangerous. She spends much of her time on Clear Island, where she swims and begins to attract the attention of the islanders as well as of a little goat that walks upright. The islanders are very suspicious of strangers–blow-ins they call them–and they are particularly concerned about this young woman who swims in their harbor. They are also going through some large shifts that threaten to change their centuries-old way of life.

As Elly, the narrator, spends more and more time on the island, she begins to feel, to a small degree, a part of the island–but she knows that this is a false feeling. She befriends a blind goat-herder and  learns of his heartbreaking personal tragedy, and then discovers a much larger tragedy that once wiped out an entire generation of islanders–except for two. She also begins to see that her marriage is not strong enough to withstand the battering that the move across the ocean occasions. She watches it erode and sadly understands why this is occurring.

The novel is many things–it is a domestic novel about marriage infused with a magical realism built on folk lore and village life.  It is a novel about enterprise and failure. About love and its withdraw. About the fear of strangers and the resistance to change. Elly attempts twice to swim to Fastnet Island–something no one has actually ever done–and in describing this momentous feat, Bondurant elevates his already lofty writing into something sublime.  Neither attempt is successful, but both are certainly memorable. In a whirling world of deep open-sea, hallucinogenic visions, and towering inspirations, Elly’s swimming anchors this already magnificent read.

Because of the epigraphs taken from the journals of John Cheever and the various allusions to him and his stories throughout The Night Swimmer, there have been the expected comparisons between the two. I find this a little wrong. For while the epigraphs from Cheever’s journals are appropriate and thoughtful,  and the thematic focus on dualities similar to that in Cheever’s own stories, the writing of The Night Swimmer seems so much fuller, fatter, more exuberant.  Cheever’s writing, for me, reflects the dessicated suburbias that he depicts, and reflects it in a much leaner style of writing.

In many ways I wish that the novel ended one chapter before it did. There is an epilogue of sorts, a tying-up of things, that I found unsatisfying. I would have rather left Elly on Clear Island, with both her and the reader trying to figure out the impact of what just happened, of where the future lies.

I am reading a book, The Night Swimmer by Matt Bondurant, where early in the novel, a young, successful couple have these yearnings to chuck it all and to move to Ireland.  They are intelligent and aware of the commonness of this trope–they intentionally nickname their street “Revolutionary Road” after the Richard Yates’ novel.  Earlier, before the dream of starting afresh in Ireland, the couple had wished to live in the time period when the novel Revolutionary Road takes place–a Cheever-esque world where pitchers of martinis and pyramids of cigarettes punctuated each evening. That glamorous “Mad-Men” world had not work out for them, but the dream of emigrating does: the husband wins a pub in County Cork, Ireland.  Needless to say, the paradise/excitement/vigor of the new life they imagined in this other world does not pan out they way it had in their dreams.  And like in Richard Yates’ novel, the marriage suffers more than greatly.

What is it about us that makes us often wish we were in some other place, some other time?  In Midnight in Paris,  Woody Allen wrestles with this question. The protagonist wishes he lived in 1920s Paris, but the 1920s woman he meets wishes she lived in the Paris of the 1890s?  And in fact, the life he is already experiencing in 2011 turns out to be full of promise. Why is this nostalgia for a world other than our own,  for an imagined place and an imagined time, so strong?  Is it  general among everyone?  Or only with a certain type of person?

I walked out to get a coffee today and on my walk home I cut down an alley.  Looking around me, I realized that I could have been walking in any foreign city with any foreign 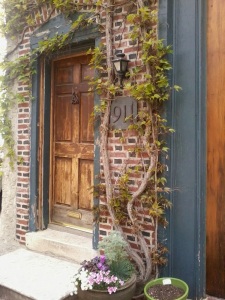 adventure around the corner.  I could have been in Paris, in Cork, but I was merely a short stroll from my own house. I took a picture with my phone.  The concept of a more exotic, romantic other place is just a whiff of smoke–it is always around us if we keep our eyes open.

Now it is often said that one doesn’t appreciated one’s home until one is separated from it. Joyce gave us a loving, photographic picture of Dublin, but only when he was writing in Switzerland and Paris.  Beckett too gives us an unnamed but undoubtedly Irish landscape in his novels and several of his plays and he too was across the sea.  But that is different than romanticizing a place one wishes for, a place that does not exist.  What Joyce and Beckett do is understand what they had left, see it without the distortion of being so close within. This is not the same as dream-manufacturing, as imagining a better world through the kaleidoscope of nostalgia and generalities.

Nevertheless, there are still many days when I wish I was somewhere else, when I don’t appreciate the vitality of the world around me. But in these daydreams, it seems that I am never working, that there is no concern about putting food on the table or where the next dollar is coming from–who wouldn’t find that attractive. And that’s what makes it all somewhat of a sham.