It seems appropriate that there are three book-covers for John Banville’s Ancient Light. For confusion–or perhaps”uncertainty” –is the appropriate word for the various threads that form the cloth of Banville’s novel. Weaving together three stories (at the very least), Ancient Light details the aging actor Alex Cleave’s misted memories and the challenges of his present life.

Particularly important in his mind are the affair he had when he was 15 with the 35-year old mother of his best friend, his daughter who killed herself in Italy ten years before the novel begins, and the young “movie-star”with whom he–a respected stage actor– is filming his first movie. And hovering in the background, drinking tea in the kitchen while Cleave writes these “memoirs” is his wife, Lydia, who is struggling with their daughter’s death in her own way.

So who are the women represented on the book covers? Is that Mrs. Gray, his first love standing in front of the shop? Or his daughter waiting impatiently for his arrival? Is that the actress Dawn Davenport’s slip? Or Mrs. Gray’s? Or his daughter’s? And who can that be dancing? Mrs. Gray and young Alex seems obvious. But could it also be the characters that Cleave and Davenport are playing in their film? Or his daughter and the mysterious man she was working for (and whose child she was carrying) when she flung herself into the rock-strewn sea? 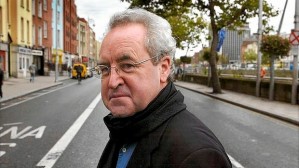 That we can not be sure is part of the joy and wonder–and admiration–one feels in reading Ancient Light. Banville is an exquisite writer–and I do not use that word lightly. Character description, dialogue, setting, interior life–all are rendered with keenly sensitive language and thoughtfulness. At one point, the sky is the color of “wetted jute“; at another, it is described as “a layering of bands of clay-white, peach, pale green, all this reflected as a vaguely mottled mauve wash on the motionless…canal.” Some of the writing is heart-wrenching in its perfection; some is amusing. Here is Cleave describing a “researcher” sent by the movie company to help him with his role:

Billie, however, is obviously a native of these parts, a short pudgy person in, I judge, her middle to late thirties. She really is of remarkable shape, and might have been assembled from a collection of cardboard boxes of varying sizes that were first left out in the rain and then piled soggily any old way one on top of the other. The general effect was not improved by the extremely tight jeans she was wearing, and the black polo-necked jumper that made her large head look like a rubber ball set squarely atop those precariously stacked cartons.

Here is what the aging Alex has to say early about love:

He is aware of both the poignancy of those words and the sadness of the thought in the presence of his wife.

What Ancient Light is most surely about is the past. Cleave–believing he is nearing the end of his career–is enamored by it, by the love affair with Mrs. Gray (he notes the inexactness of this phrase) and by the death of his daughter.

Because I am getting old and the past has begun to seem more vivid than the present, he states, and then later, when he learns of what he mis-remembered, he concludes that often the past seems a puzzle from which the most vital pieces are missing.

When in Italy with Dawn Davenport he meets a mysterious Argentinian, (a ghost? his doppelgänger?) who over a bottle of wine says this too him:

“Even here,” he said, ” at this table, the light that is the image of my eyes takes time…to reach your eyes, and so it is that everywhere we look, everywhere, we are looking into the past.”

But the past is slippery for both Cleave and the memoir he is writing. He notices instances when the progression of time seems to slip, to miss a cog:

There are moments, infrequent though marked, when it seems that by some tiny shift or lapse in time I have become misplaced, have outstripped or lagged behind myself.

Cleave’s stories ultimately come together in subtle and satisfying ways. There are coincidences, but Cleave does not believe in coincidences. There are “apparitions,” though Cleave is reluctant to but wishes to believe in an afterlife. (Twenty years ago, Banville did write a novel Ghosts.) There is doubling and there are doubles. There is a subtle knowledge of and reference to Greek mythology, and a faint feeling that the ancient gods are still at work in the lives of these mortals. And it is all done in a lush, rich style that is the very antithesis of modernity’s spare and sparse writing.

John Banville is an author who writes intelligent and dense books that deserve a much wider readership. His novel The Sea won the Man Booker Prize (much to the dismay of critics who felt it wasn’t commericial enough.) And lately he has also been writing detective novels under the pseudonym Benjamin Black. And I just learned, when I mentioned Ancient Light to a friend that this novel is in fact the third of a loose triology featuring Alex Cleave, his wife Lydia and their daughter Cass.

I will have to hunt them down.

I first started reading James Kelman back in 1994 when his novel How Late It Was, How Late had just won the Man Booker Award. The novel was entrancing. Driven by a rough Glaswegian dialect that was musical, whimsical and earthy, the novel followed the Kafkaesque troubles of an ex-con who has been beaten, blinded and abandoned.  I remember the plot only faintly, but the language itself will stay with me forever.

It was as if Samuel Beckett had plopped down into Glasgow, went on a long bender, and lived to tell the tale.

After that introduction, I read his short story collection, Busted Scotch. Again, while I enjoyed the stories, it was the language that remained. Lively, working-class language, filled with imaginative slang and time-born wisdom.

I remember being excited when I learned of his next novel, You Have to Be Careful In the Land of the Free when it came out in 2005. How wonderful, I thought, to hear that raspy, magical, glittering voice unleashed in the vastness of the Americas. But I was greatly disappointed.  Storyline was never his strong point, but here even the voice had faded. I was off Kelman for a while.

And I guess to my detriment, because Kelman’s next work was widely praised.  Kieron Smith, Boy was a story of an urban and lonely childhood and it was called both “magnificent and important.”  But I missed it and now it’s at the bottom of a long list of must reads.

But I did pick up Kelman’s latest novel, Mo Said She Was Quirky–mainly because of the intriguing title. And once again, the language is at the forefront. Once again we are in a Beckettian world of isolation and words. Yet, unlike anything he did before, in Mo Said She Was Quirky, Kelman’s lyrical speaker is a woman, Helen. The novel is told primarily in the first person, much an extended interior monologue. Other characters appear, but we see and hear them only through Helen’s eyes.

Helen works the night shift at a London casino, where she and her daughter have moved to get away from her no-account husband in Glasgow and where they now share a small, one-bedroom flat with her Pakistani lover, Mo.

In a cab on the way home one night, Helen stares at two homeless men stagger across the intersection in front of the taxi. One of the me stares intently into the cab and Helen recognizes him as her brother. This recognition begins her long night of self-examination, self-incrimination, and self-rationalization. Why is she here? Why is he there? How dysfunctional was her and her brother’s growing up or is this the state of all humanity? Helen is generous in her compassion and stingy with her self-pity. Many have it worse than she, she deliberates, and then realizes that misery, sorrow, and pain are  very relative and the fact that she has a hot shower and another person does not does not make her pain any easier or lighter to bear.

Completely knackered and unused to the night-shift, Helen, nevertheless, cannot sleep. Her mind races with memories of her brother, her damaged parents, her child, her ex, and the kind man she lives with, Mo. She waits until Mo and her daughter waken, watches them go off to school, and yet, still, she cannot sleep.  She thinks greatly about the differences between men and women, the posturing and bullying of those she has known, the favorites that her parents very obviously played. She thinks about racism and worries about Mo. She thinks of the urban jungle and worries about her daughter.

As night turns into day, as Mo takes her child to work, she grabs a few hours of rest but her mind is increasingly racing. And as it does we learn more why this simple-hearted woman is so fraught with worry about the future, so done-in by her present, and so haunted by her past.

I give Kelman a lot of credit for trying what he does so well in a woman’s voice. At times, Helen’s monologue seems to drag but at others it is riveting, revealling bits and bits of a single life and illuminating the mind of a  woman who lives in constant worry about the world around her–and the past that formed her.

I’m not really sure yet how I feel about Mo Said She Was Quirky. I do know that Kelman’s voice in it has me returning to reread How Late It Was, How Late. That’s the novel of his that I loved the most, and the others have yet to measure up.