About two and a half blocks from where I live there is a small patch of grass at the triangle where three streets cross–Girard Avenue, American Avenue  and 2nd Street. There, Girard is a busy, double-wide street with an active trolley line, restaurants, tattoo parlors, bodegas, beauty salons and banks.  2nd Street is a bit smaller but filled with restaurants, bars, boutiques, and galleries and American is but a desolate patch with a beer distributor and the abandoned stables where the horses and carriages that circle the historic area used to be housed. On the north side of Girard, American is just beginning to blossom, anchored by the beautiful Crane Building which houses both the Indigo Art Galleries and the Pig Iron Theater Company.

Sitting in the triangular patch made by these three streets  is a large statue of Don Quioxote astride his horse Rocinante. Why Don Quioxte?  I am not sure.  The plaque on the statue says that it was a gift from a “sister city” in Spain, Ciudad Real, and it is an exact replica of an original sculpture by Joaquin Garcia Donaire.  But again, why Quixote? 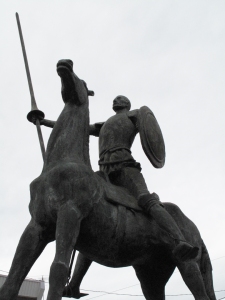 Quioxte was in many ways a mad man…an idealistic, well-meaning mad man, but mad nevertheless.  His quests and adventures, while couched in the greatest of intentions and wrapped in the mantle of chivalry and honor, were actually farcical and embarrassing.  Quioxte’s famous battle against the windmill, which he had perceived as a dragon, has given us the idiom “Tilting at Windmills,”  a phrase for fighting against the wrong thing, about declaring war on something that is un-winnable and un-fightable, or for dreaming a victory against something that is not at all what one was fighting for or against.  So why is he in Philadelphia?

Philadelphia prides itself on its place in the history of the United States.  It was from here that the colonists argued, debated and hammered out a Declaration of Independence and then a Constitution, both of which are revered around the world.  Throughout the year, one would be amazed at the hordes of international tourists who pose for pictures in front of the revolutionary landmarks, in front of Independence Hall or the Liberty Bell.  In a world where independence and liberty are not a given, it is humbling to see so many people come to honor it here in Philadelphia.  And so, why Don Quioxte that deluded knight?  Is the fight for civil liberties and religious tolerance–two concepts that were the lynchpins of the city–a quioxtic dream?  Is working towards harmony and liberty really just a pipe-dream of some writers from the 18th-century Enlightenment.

But this thing with knights gets odder still.  Just twenty-three  blocks due west of Don Quioxte is a blazingly gilded statue of Joan of Arc.  Now, I have always loved the story of Joan of Arc.  (I may be one of the few people who have read Mark Twain’s novelization of her life other than for academic credit. And I have read several serious biographies of her as well.)  I have always loved her spunk, her feistiness, her belief in her cause. But one has to admit, as a representative of knighthood, she is a bit suspect. This was a woman who heard voices, voices that encouraged her to leave her simple peasant life, shift to a more masculine nature, don armor and lead a country into battle.  Which she then went and did!  This statue–which is a copy of the one that sits in the Place des Pyramides in Paris and was sculpted by Emmanuel Fremiet–looks across at the neo-classical beauty of the Philadelphia Art Museum and is the starting point for the famous Kelly Drive. It is blindingly gilt and quite handsome.

But then again why, in this city that put an end to medieval monarchies and aspired to a new form of human government, has a heroine of the monarchistic tradition been placed in such a prominent public position?

It probably means nothing, but I think of them often.  They are basically on the same street, less than 2.5 miles apart in a straight line.  They are undoubtedly–along with Shakespeare’s Falstaff –the most suspect knights in all of history.  And yet they are here, in the city that shook off a king and aspired to freedoms never before imagined.

(A kind of interesting irony: just as Joan of Arc died in the flames in 1431, the model for the Joan of Arc statue, 15-year-old Valerie Laneau, burned to death in a house fire when she was 77.)