I had wanted to like The Angels’ Share. In fact, I wanted to love it. It had all the makings of a great film: a master artist in Ken Loach, a lovable though incompetent gang of petty criminals, Scotland both urban and rural, and a plot involving Scotch whisky.  It had won the Jury Prize at Cannes in 2012 and even featured that catchy old tune by The Proclaimers, “500 Miles.”  And yet something felt flat.

Robbie (Paul Brannigan) is a soon-to-be-father with severe “anger management” problems. He is before the judge on assault and battery charges against three thugs who spend much of the film trying to get revenge. (It’s a tribal feud that can be traced back to their fathers.)  His pregnant girlfriend, Leonie (Siobhan Robinson) is about to deliver, and her father and his brothers want Robbie out.  The father calls Robbie a “waste of space” and offers him £5000 to move to England and away from his daughter.  While prison probably would be safer for him, the judge orders him to 300 hours of “community service.”

“Your record is appalling. For much of your short life you have behaved like a thug,” proclaims the judge to Robbie, and then sends him out into the rough life again, where that same thuggery is waiting its turn to do him in.

It is there, in community service, that he meets his gang of co-workers: Mo (Jasmine Riggins), a kleptomaniac who was arrested walking out of a store with a giant Macaw and called the arresting officer a “grumpy twat”; Rhino (William Ruane), arrested for urinating and defacing the statues of public dignitaries; and Albert (Gary Maitland), a profoundly stupid man, who was arrested for disrupting public transportation (he drunkenly fell onto the rail tracks). For all of them, life  is hopeless; Robbie, alone, sees hope in his newborn son, Luke, albeit a hope tinged with fear that the world he knows will bring down his son as well. 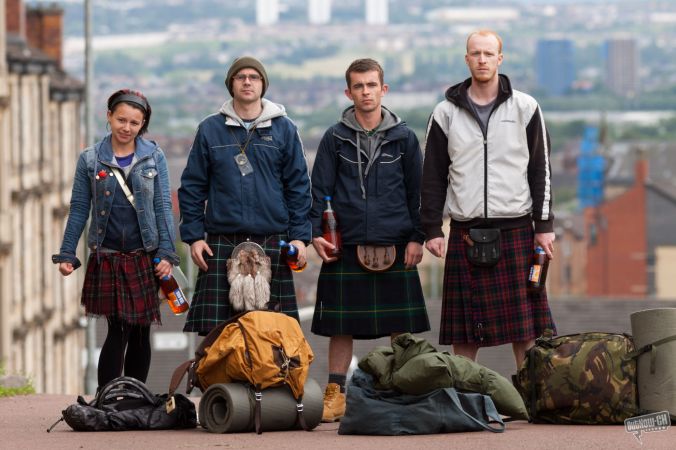 Having to oversee this very  incompetent and hopeless crew is Harry (John Henshaw) who has the patience, humor and compassion to see what a sorry lot he must deal with and how the justice system–and society in general– is doing none of them a favor. After Harry drives Robbie to the hospital where his son is being born and where Robbie is refused entrance by Leonine’s family and brutally pummeled by her uncles, Harry tends to Robbie’s gashes and injuries, brings him home, and in bracing him up offers him a glass of whisky.

Robbie does not drink–he has enough problems without that–but he becomes intrigued with the whisky: the ratings, the histories, the auctions, the distilling process, and the distinctions. And he becomes very deft at rating and describing whisky.

It cannot be an accident that  “whisky,” a word that comes from the Scottish Gaelic uisge beatha, means “water of life,” for that is exactly what it becomes in The Angels’ Share.  For the plan that Robbie hatches–involving a cask of highly prized whisky–will become, for all of them, the chance for a better life…or a further descent into their downward spiral.

Ken Loach has been described as a social-realist director and his films routinely look at those whom society has written off.  His world is not the violent underbelly as portrayed by Guy Ritchie or the taut, impoverished world of Mike Leigh, but a world in which hope does exist and brightness and compassion. This is not to say that everything in Loach’s vision of Paul Laverty’s screenplay is Pollyannish–by no means, no.  Robbie and his mates live in a violent, bleak world. But Loach always tends to offer a glimmer of hope.

Certainly, The Angles’ Share has its own share of faults and inconsistencies, but it is a likeable film nevertheless.  I simply didn’t love it.

Watch and enjoy the trailer below: