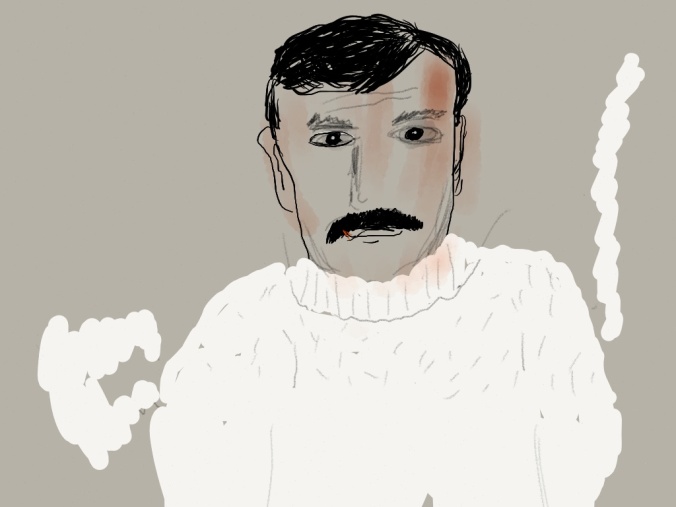 Hemingway as a young man.
illustration 2014 by jpbohannon

The most gaping hole in my formal education is a lack of courses in American Literature. In undergraduate and graduate school combined, I had taken only one course in American lit. My understanding is mostly self-directed–and often spurred on by the requirements of teaching American Lit survey courses for many years. Certainly, I know the school classics: The Great Gatsby, Huck Finn, The Scarlet Letter, The Old Man and the Sea, The Sound and the Fury.

And as a reader, I have discovered on my own Vonnegut and Pynchon, Heller and Elison, Mailer, Roth and Updike. And from my friends I have learned to love DeLillo, Wallace, and Johnson.  But I know there are gaps.

I took a tour, a few weeks back of Ernest Hemingway’s home in Key West. I respect and admire Hemingway’s short stories–and often teach them in writing classes for their craft–and have fond memories of reading The Sun Also Rises and A Moveable Feast,  but I never read much else. Anyway, the tour guide told us that it was here in the Key West house that Hemingway wrote a large portion of his work, in particularly A Farewell to Arms, which he stated is considered Hemingway’s greatest work. (Remember, he is a tour-guide, not a literary critic.)

And so I decided to give it a try. And to be truthful, in the beginning, it was slogging read at times.

First Edition of A Farewell to Arms

In brief, the novel is the semi-autobiographical story of an American ambulance driver, Frederic Henry, working for the Italian army during World War I, who is wounded, falls in love with his nurse, impregnates her and sneaks across the border with her into neutral Switzerland. There are pieces that are perfect Hemingway: the army’s long retreat, the Swiss countryside in winter, the view from a hotel room. These passages are clear and distinct and one can almost imagine Hemingway speaking them himself.

What one cannot imagine is anyone speaking the dialogue that Hemingway has given his characters to speak. The dialogue among the soldiers is stilted–but I thought perhaps that was intentional as the narrator is an American and the conversation is between him and his Italian comrades. But the conversation between the lovers–between Frederick and Catherine–is downright embarrassing.

Perhaps, it is dated. But I do not believe so. The dialogue in Fitzgerald’s Gatsby published four years earlier in 1925 is not as silly or inane. This can’t be how people talked 75 years ago. Perhaps, Hemingway is trying to capture the coded, playful language that lovers often engage in privately. Well if so, it should have remained private. While Catherine Barkley is a strong woman–a British nurse working in the Italian theater of war–when she speaks she sounds infantile and ditzy, hardly the type that Henry would fall for.

But then, perhaps, it is just me, the reader, far past the ages of the protagonists, a little bit wiser (one hopes) and a little bit more jaded.

And yet, having said all that, the slogging read and the cloying dialogue are more than made up for in the last chapter. It is here that Hemingway elevates the novel to something different, something larger. It succeeds not merely because of the drama–which in lesser hands would have become melodrama–but because of  the craft. The language is pared down–like Joyce had taught him–and there is simply life, death, man and woman. It doesn’t get more basic than that. In the end we admire Frederic Henry more than before–I found him hard to like or take seriously throughout much of the book– and we admire Hemingway too. We admire what he is doing and we understand how this novel placed Hemingway in the pantheon of American authors.

Hemingway famously once claimed that he rewrote that last chapter 39 times. Well, then it is a good advertisement for revision, for it is so superior to everything else.

The novel was an instant–and huge–success.  Within a year of its publication a dramatization was staged and in 1932 Hollywood released a major film of the novel, featuring Gary Cooper and Helen Hayes.  In 1957, a second film was made, this time starring Rock Hudson and Jennifer Jones.

I have seen neither, and I won’t search for them. It is Hemingway’s language and style that is the star of A Farewell to Arms, not the story.  And much of that would be lost in film.