yes I said yes I will Yes.

Dublin had its usual extravaganza with crowds retracing Leopold Bloom’s wanderings and with women’s hats that rivaled those worn at major horse races (remember to bet it all on “throwaway.”) In New York, the complete novel was read outside writer Colum McCann’s tavern, aptly named Ulysses. And at Philadelphia’s Rosenbach Museum and Library, (where Joyce’s manuscript is housed) there was, beside the usual full reading, an unusual installation.

The artist, Jessica Deane Rosner, wrote out the entire text of the novel on 310 yellow, rubber, dish gloves and suspended them from the gallery ceiling in a very Joycean spiral. Rosner stated that it was Joyce who showed us that the things of everyday life–including the muck and the un-pretty–are the very essence of and inspiration for Art.

And so she used the mundane kitchen gloves to carry Joyce’s text–a text replete with the beauty of life’s mundane grime and natural effluences. 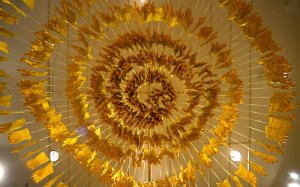 But that’s not what I want to talk about today. …

I want to talk about the last seven words of the novel, the strong affirmation that ended Molly Bloom’s long nighttime reverie in the early hours of June 17, 1904.

It is this affirmation, the “yes I said yes I will Yes” that makes Ulysses so important. For, if ever there was a modern Everyman, it is her husband, Leopold Bloom. Leopold the ridiculous, the schlump, the man she has cuckolded just hours before. Leopold the grieving, the masturbatory, the lecherous, the neighborly, the isolated, the humane, the persecuted. And to him–and he is each of us– Molly proclaims a resounding Yes! 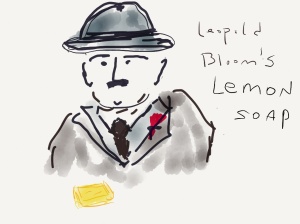 I have a good friend, Ken Campbell, who served thirteen long months in Vietnam before becoming one of the leading figures in the Vietnam Vets Against the War movement. This fall the two of us went together to see Samuel Beckett’s Endgame. I wallowed in the existential bleakness; he did not. He enjoyed the company. He had spent too long in Vietnam, wondering every night if he was going to live another day, and today he has no time for Beckett’s desperate vision.

He sides much more with Molly Bloom’s “Yes”!

So here’s to saying “yes.” Saying “yes” to all the myriad things and people that life places in front of us: like the noodle shop at 56th and 6th in NYC… the children’s fountain on the Ben Franklin Parkway…the surprise of 310 yellow rubber gloves hanging from an elegant ceiling.

A while back, I had posted about a performance of Samuel Beckett’s Endgame that I ‘d seen at the Arden Theater in Philadelphia. In it, I quoted my favorite lines from the play:

The character Hamm has made the immediate inference that if his father is crying, then he is alive. And we, by extension, apply it to the human condition. I remembered this line–and the act of crying– this week when teaching Waiting for Godot. (Actually, the crying seemed more appropriate than ever for someone trying to teach Godot to 18-year old boys during their last week of school when the temperatures are in the mid-70s and the sun is bright! Hah!)

Early in the play, Estragon and Vladimir point out the tree where they are supposed to wait for Godot. (It is the only piece of scenery. The scene description reads simply: A country road. A tree. )

Estragon: [desparingly] Ah! [pause] You’re sure it was here?

Estragon: That we were to wait.

Vladimir: He said by the tree. [They look at the tree.] Do you see any others?

Estragon: What is it?

Vladimir: I don’t know. A willow.

Estragon: Where are the leaves?

Vladimir: It must be dead.

Later on, as Vladimir and Estragon rebuke Pozzo for his treatment of his slave/servant, Lucky, there is more conversation about crying:

Pozzo: Old dogs have more dignity! [He proffers his handkerchief to Estragon.] Comfort him, since you pity him. [Estragon hesitates.] Come on. [Estragon takes the handkerchief.] Wipe away his tears, he’ll feel less forsaken.

Vladimir: Here give it to me, I’ll do it.
[Estragon refuses to give the handkerchief. Childish gestures.] 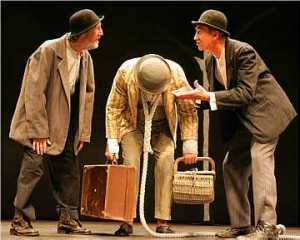 Estragon and Vladimir with Lucky from samuel-beckett.net

Pozzo: Make haste before he stops. [Estragon approaches Lucky and makes to wipe his eyes. Lucky kicks him violently in the shin. Estragon drops the handkerchief, recoils, staggers about the stage, howling with pain.] Hanky!
[Lucky puts down bag and basket, picks up handkerchief and gives it to Pozzo, goes back to his place, picks up bag and basket.]

What are we to make of that? What is the significance of Lucky’s crying? Of Estragon and Vladimir’s desire to comfort him? Of Lucky’s lashing out at his comforter? And of his immediate subservience to his persecutor.

There is, of course, much more going on here, but the small emphasis on tears should be noted. Earlier Beckett had equated crying with living. Are we simply to be reminded that Lucky is a living, human being, and leave it at that? (We knew that anyway.)

What is our responsibility to those who are “crying”? To those who are inconsolable? Good questions, all. And ones that we should take the time to think about every so often.

It was one year ago last week that I started blogging.  But I  quit before that anniversary came around.

Yes, I quit blogging in late November, because I could no longer do it.  I loved doing it. I had met some extraordinary people–Romanians in London, Americans in Ecuador, an art colony in Italy.  I enjoyed thinking about the books I read, the music I heard, the films I watched.  And I enjoyed trying to get those thoughts “down on paper.” 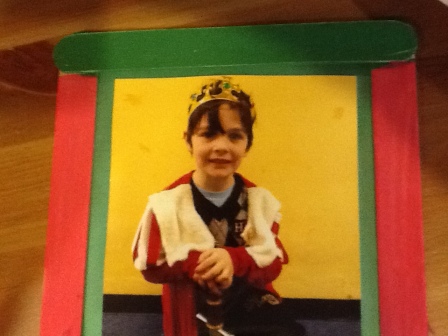 But then my life changed drastically and blogging found itself way down on my list of priorities.

I became responsible for a seven-year old boy.

Henry is a delightful young boy. He is creative, bright, and personable.  And it is my job, to a degree, to nurture and protect him. I shower him with love and I make sure that he knows he is loved. I try to pay attention to what he does and what he says and what he feels.

We play silly word games. We read together: I to him on the sofa; he to me on the steps, (where the game is that I must go up or down a step every time he turns a page.)  He is seven years old, but will still hold my hand when we walk places, at least for now.  We often take “adventures” together, and these are usually simple jaunts across the city on public transportation. We take a trolley and then a subway and then a train and then we reverse ourselves, adding in a bus on the return trip. He points out train yards and sidings, trolley tracks and subway couplers. We stay and wave to the drivers after we get off and they drive away. (He does LOVE his transportation!)

Sure, there are time when I must get him to do things that he doesn’t want to: to try foods he does not like (that comprises everything that isn’t pizza) or to stop talking and listen when others are speaking or to slow down with his homework, with his handwriting. I try to teach him, and I try to do so with patience, with gentleness and with love. 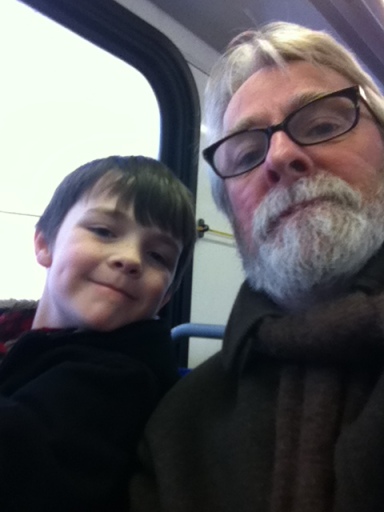 Henry and I on the R5

Having a seven-year old in your 30s is one thing; having a seven-year old in your late 50s is something else altogether.  I haven’t read a book in I can’t say how long. My film-going is greatly constricted.  And my television viewing is completely limited to Phineas and Ferb (don’t ask!) and America’s Funniest Home Videos.  And yet his enjoyment of both of these shows is genuine and sweet. He laughs with purity and with delight. And that, I wouldn’t trade  for anything.

I went out last Thursday night with my wife and some friends to see a play: Endgame by Samuel Beckett.  I had read it many times, but had never seen it performed, and so we made definite plans to get there.

Endgame is the second of the four major plays that Beckett wrote following World War II. (Waiting For Godot, Endgame, Krapps Last Tape and HappyDay.) Situated firmly in the Theater of the Absurd, Endgame presents Hamm, a blind, crippled man who sits in a make-shift wheel-chair in a single, disheveled room. He is tended to by Clov, who, conversely, is unable to sit.  In the room are also two trash bins.  In the one is Hamm’s legless father, Nagg, and in the other, his legless mother, Nell. Hamm pontificates on the bleakness of  life, on the attraction of story-telling, on the uncertainty of a future.  It is one of my favorite plays.

In one piece of dialogue that I particularly love, Hamm asks Clov to open the trash bin to see what his father is doing:

I love this. How simple, how poignant, how piercing. It perfectly captures Beckett’s–and to a large degree, my own–world view.  For better or worse, my personal philosophy has long been greatly informed by Beckett’s.  Or else, I had already formed it and because of that I found Beckett. But, for one reason or another, I am drawn to his bleakness and  emptiness–and to the black humor that attends it. 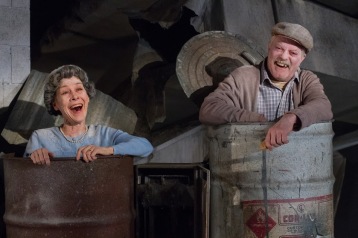 Scott Greer and James iJames as Hamm and Clov in the Arden Theater’s production of Endgame. Philadelphia, February 28, 2013.
© Photos by Mark Garvin

As I said, I have long enjoyed and embraced Beckett’s dire existentialism.  But now, I can no longer afford it, can no longer afford to wallow in such bleakness, to delight in such barren absurdity.  I have to try to tamp it down. For I have Henry now to take care of, and that is very much the purpose of my life.