On Wednesday night I attended a rally to kick off the political campaign of my brother-in law Chris McCabe, who is running for judge in Philadelphia and who has now collected the 1000 names necessary to put his name on the ballot. The campaigning officially began this week.

The rally was held at the Ethical Humanist Society of Philadelphia, an inconspicuous building on Philadelphia’s ritzy Rittenhouse Square. I had been there before.

Several years ago, I had been awarded a fellowship by The National Endowment for the Humanities to read “Texts of Toleration”–those works that promoted liberty, free will, and understanding. The opening reception was held at the Ethical Society. That both events were held here made sense: the pieces we were to read dealt primarily with the ethics of society and my brother-in-law is one of the most socially conscious people I know. 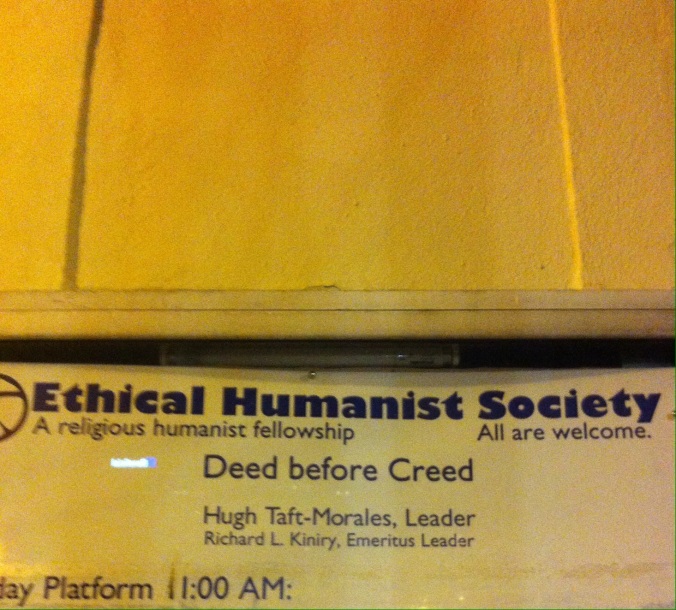 And now, I was here again.  I don’t know if I remember seeing the plaque at the front steps the first, but I liked what it said: “DEED BEFORE CREED.” In our modern world, we are too often reminded that belonging to a particular “creed” is no assurance that “goodly deeds” are to follow.  Certainly, we can point to most of the major world religions to find evidence of this.

And so, I decided to look into this place that calls itself “The Ethical Society.”

The American Ethical Society was officially started in 1877 in New York (as the New York Society for Ethical Culture) when Felix Adler gave a sermon that focused on the immorality of exploiting the underclasses–which at the time included women and labor. Adler’s European education informed his Kantian belief that morality could exist separate from organized religion.

Within ten years of the founding of New York Society, three other societies were established in the U.S., in Philadelphia, in St. Louis, and in Chicago.

The Sea of Faith
Was once, too, at the full, and round earth’s shore
Lay like the folds of a bright girdle furled.
But now I only hear
Its melancholy, long, withdrawing roar,
Retreating, to the breath
Of the night-wind, down the vast edges drear
And naked shingles of the world.

The retreating “sea of Faith,” the general Victorian uncertainties of the day, was the impetus for the foundation of the societies in Britain.  One can trace the American ethical cultural movement to various ethical movements in early Britain.  There was a South Place Ethical Society in London as early as 1793. It became a Unitarian chapel a few years later and is most noted for its strong support of women rights. By the mid-nineteenth century, the Unitarians moved out and the place became the South Place Ethical Society.

A few years after Adler had established the Ethical Culture Movement in the U.S., the Fellowship of New Life was established in Britain, bringing together some of the more innovative and brilliant intellectuals of its time. The fellowship did not last long, but was instrumental in finding the Fabian Society which had a large impact on British intellectual and social thought of the time.  Within years, however, there were four Ethical Societies in London and over fifty societies in Great Britain by 1910.

So what’s it all about?

As far as I can tell, the Ethical Society basically acknowledges and celebrates the inherent worth of all people. It emphasizes that moral action is not dependent on religious creed and that the betterment of self implies a betterment of society.

That all seems pretty good to me.

And then one of those weird coincidences.  Four days after beginning–though not finishing–this blog post, I read a review of two volumes of work by Bernard Malamud.  In the work they mention, that Malamud, the son of Jewish immigrants, wanted to marry the daughter of Italian Catholic immigrants.  Malamud’s father was highly against the marriage. (He did not speak to his son for years afterward.)  But they married anyway–at the New York Ethical Society.  It is a small bit of information, but it highlights the society’s pushing aside of parochial prejudices and celebrating a basic goodness.

Blackberries in a white bowl.

We read two poems about Blackberries the other day. One by Seamus Heaney, one by Sylvia Plath. While both are dark, the latter is much darker. I did not tell them the facts of Plath’s life or how near in time the poem was written before her suicide. I will let them find that out on their own. (We try to downplay the biographical.)

Late August, given heavy rain and sun
For a full week, the blackberries would ripen.
At first, just one, a glossy purple clot
Among others, red, green, hard as a knot.
You ate that first one and its flesh was sweet
Like thickened wine: summer’s blood was in it
Leaving stains upon the tongue and lust for
Picking. Then red ones inked up and that hunger
Sent us out with milk cans, pea tins, jam-pots
Where briars scratched and wet grass bleached our boots.
Round hayfields, cornfields and potato-drills
We trekked and picked until the cans were full
Until the tinkling bottom had been covered
With green ones, and on top big dark blobs burned
Like a plate of eyes. Our hands were peppered
With thorn pricks, our palms sticky as Bluebeard’s.

We hoarded the fresh berries in the byre.
But when the bath was filled we found a fur,
A rat-grey fungus, glutting on our cache.
The juice was stinking too. Once off the bush
The fruit fermented, the sweet flesh would turn sour.
I always felt like crying. It wasn’t fair
That all the lovely canfuls smelt of rot.
Each year I hoped they’d keep, knew they would not.

And here is Heaney reading it:

What we have are the thrills and joys of nature’s bounty, of love, of lust, followed by its ultimate disappointment, and capped by the human facility to continue even with the knowledge that disappointment is almost always assured.

But that last line is hopeful despite the odds: “Each year I hoped they’d keep, knew they would not.”

Hopeful is what Sylvia Plath’s poem is not! It too holds the gathering of blueberries in awe, is humbled by their abundance and their promise, but in the end there is nothing. Though that should not be a surprise. The first line itself drums in that nothingness, repeating the words “nothing,” “nothing,” “nobody.”

Nobody in the lane, and nothing, nothing but blackberries,
Blackberries on either side, though on the right mainly,
A blackberry alley, going down in hooks, and a sea
Somewhere at the end of it, heaving. Blackberries
Big as the ball of my thumb, and dumb as eyes
Ebon in the hedges, fat
With blue-red juices. These they squander on my fingers.
I had not asked for such a blood sisterhood; they must love me.
They accommodate themselves to my milkbottle, flattening their sides.

Overhead go the choughs in black, cacophonous flocks—
Bits of burnt paper wheeling in a blown sky.
Theirs is the only voice, protesting, protesting.
I do not think the sea will appear at all.
The high, green meadows are glowing, as if lit from within.
I come to one bush of berries so ripe it is a bush of flies,
Hanging their bluegreen bellies and their wing panes in a Chinese screen.
The honey-feast of the berries has stunned them; they believe in heaven.
One more hook, and the berries and bushes end.

The only thing to come now is the sea.
From between two hills a sudden wind funnels at me,
Slapping its phantom laundry in my face.
These hills are too green and sweet to have tasted salt.
I follow the sheep path between them. A last hook brings me
To the hills’ northern face, and the face is orange rock
That looks out on nothing, nothing but a great space
Of white and pewter lights, and a din like silversmiths
Beating and beating at an intractable metal.

Perhaps the flies believe they have found it.

For the speaker, however, no reward awaits. The sea–to which she had looked forward to throughout her journey–is a pale wasteland. Again there is the repetition of the word “nothing”: “…that looks out on nothing, nothing but a great space” and from within this void she hears the “Beating and beating of an intractable metal.”

That ‘beating and beating” reminds me of the sea in “Dover Beach” where:

you hear the grating roar
Of pebbles which the waves draw back, and fling,
At their return, up the high strand,
Begin, and cease, and then again begin,
With tremulous cadence slow, and bring
The eternal note of sadness in.

It’s that eternal note of sadness that Plath’s speaker also hears, an empty, pale silence. After her walk, after her hoping to be loved, after her wanting a heaven, she comes to this cliff. And this is what she hears.

Perhaps we’ll do “Dover Beach” next.