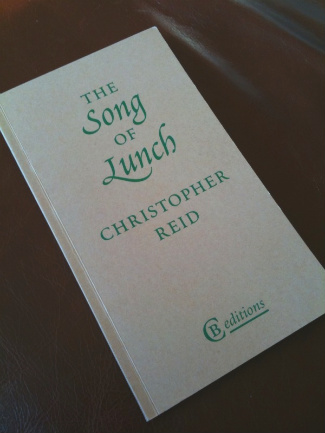 and other boozy pursuits!
Hail to the new age
of the desk potato, …

Sometimes, though, a man needs
to go out on the rampage,
throw conscientious time-keeping
to the winds,
kill a few bottles
and bugger the consequences.

The man who is lamenting the lost tradition of long lunches above is the rather bitter and sarcastic subject of Christopher Reid’s The Song of Lunch. Yet on this particular day he sticks a note on his computer screen saying that he is headed out to lunch and that indeed it is going to be a long one.

Probably, unwisely, he has arranged to meet an ex-lover for lunch at one of their old haunts. He, a copy-editor at a famous publishing house; she, the wife of an extremely successful novelist, living in Paris. The novelist is also the man she left the narrator for.

He isn’t sure what he expects from this rendezvous but little of it goes the way he hopes.

Lunch has never been more poetic, or sexier, or frustrating.  The dance of tension and attraction between the two begins immediately.

There! she says, and smiles
Lips, eyes, eyebrows
and the new lines in her forehead
fill out the harmony.

She has just entered with “There” and he counters with “Here.”

He bemoans the fact that “their” restaurant has changed so much in the fifteen year interim: the menu features:

pizzas by the yard.
More pizzas than there should be.
And too much designer pizazz.

He turns it over:
choose the right wine
and have it ready breathing
for when she arrives.

byt will do for auld lang syne.

In fact, it is for the “auld lang syne” that he is here, crumpled by the present, dashed in his literary hopes, and obsessed with a long-gone love.  This lunch is very much not the best idea of his.

But she on the other hand is charming.  Personable, open, interested, determined to enjoy the day.  But he cannot. When she asks about his life he goes on a rant about modern publishing:

Confessions of  Copy Editor ,
chapter 93.
It;s an ordinary day
in a publishing house
of ill repute.

Another moronic manuscript
comes crashing down the chute
to be turned into art.
This morning it was Wayne Wanker’s
latest dog’s dinner
of sex, teenage philosophy,
and writing-course prose.

In contrast, she is accepting and pleased with her life as:

Me? Oh, the good wife,
and loving mother.
That keeps me occupied.
I’ve no complaints.
And Paris is a fabulous city.
You really should visit.

(He has by the way, visited. Stalked her a while back but lost the nerve to ring the bell when he was at her door.)

Throughout the lunch, he observes her every move. He watches her daub her mouth with a napkin,  slice into her ravioli, ask the waiter for advice. And all of these observations are described in a rich language filled with a keen ache, for he remembers every whorl of her knuckles, every dilation of her pupil, every crinkle of her lips.

To deal with his ache, his confusion, his lust, he drinks.  Far too much.  Much more than she.

She had arrived at the lunch full of good will and charm, but his sarcastic, bitter demeanor pushes her away.

But, it is a narrative poem–it tells a story–so I won’t spoil the ending. 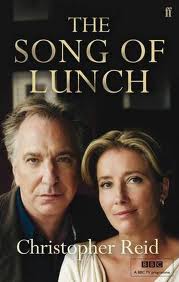 Now, in 2010, the BBC did something extraordinary.  Rather than digging in the vaults of the classics (there is an endless list of Dickens and Austen productions) or dramatizing the latest Scandinavian thriller or Scottish mystery, they decided to do something quite different.  They decided to dramatize a contemporary work of poetry.  And they did it well.

The BBC2’s production of The Song of Lunch–made to celebrate National Poetry Day in Britain– was genius simply in the choice of the actors.  Alan Rickman and Emma Thompson.  For who can better play a put-upon man, dour and drunken, and rising with lust and regrets better.  I cannot think of anyone else.  And Emma Thompson, literally shines in the role–literally that is. In one scene where Rickman is looking at her through his half empty wine glass she is glimmering.  There is a fresh aura of rightness about her that works in perfect contrast to the curmudgeonly Rickman. 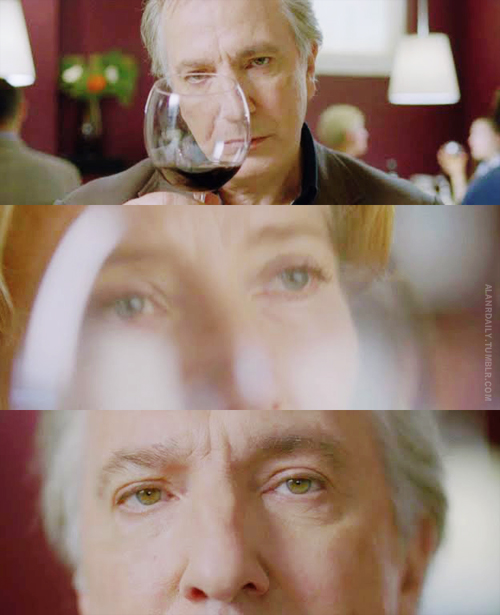 The Song of Lunch is a strange one for me, for I saw the film production before I read the book.  In fact, it was BECAUSE of the dramatization that I got the book. “Making words come alive” is such a cliche, yet in this case it is very much true.  The tiny narrative of Reid’s is served quite well when animated by Rickman and Thompson.

I’ve read the poem several times now, finding something new to enjoy each time.  I You-tubed the BBC production and watched a few scenes, but the BBC came in and took certain “chapters” off, so one loses the continuum.

I do remember those long boozy lunches.  Though I wish at the time I was as observant as Christopher Reid.  His The Song of Lunch is as rich as the carpaccio and pumpkin ravioli that were ordered for appetizers and as heady as the grappa that finished the meal.