“Sponsored by the Academy of American Poets, the Walt Whitman
Award is given annually to the winner of an open competition
among American poets who have not yet published a book of poems.” 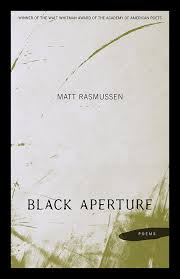 Each year the Academy of American Poets sends its members a copy of that year’s winning volume. This year the title was Black Aperture by Matt Rasmussen. And if good poetry is meant to rattle in your head, nestle there a while in the corners of your mind, and then come unbeckoned to the forefront of your consciousness, then Rasmussen’s poems pass the test and the Academy made an excellent choice.

Within the collection, there are poems about deer hunting and bird hunting: “when cleaning a grouse,/puncture the crop/to release the scent/of fresh clover.” (from “O”). There are poems that re-imagine the creation:

The animals gathered
and having cried enough

would never again.
God knew he had

asked too much. He threw himself

into the sun and burnt
into white ash. It fell

from the sky and covered
the mountains. The animal

who named everything
called it snow. (from “And God Said”)

And there are poems about poetry itself: “Through the mirror, it saw a house/of air falling inward. The poem heard/the poet calling and jumped.” (from “I am not a poem”)

But the overriding theme is the suicide of a brother.

There are three separate poems called “After Suicide” and one poem, “Reverse Suicide,” which takes the events in reverse to when both the speaker and his dead brother are once again raking and bagging leaves. In truth, the majority of poems take this momentous act as its subject. And those that don’t address it specifically are tinged with the shadow of it, a shadow that hovers over every poem.

Yet the poetry is not maudlin or morbid. It is, in fact, a source of liberation, as the speaker attempts to clarify through language both the act and his reactions, both his grief and his understanding of it, both his dead brother and his relationship with him.

Midway through the book, Ramussen places a poem called “Chekhov’s Gun.” Chekhov’s theory is that if a loaded gun appears in a play in Act 1, it must be fired by Act 5. Rasmussen begs to differ:

Nothing ever absolutely has to happen. The gun
doesn’t have to be fired. When our hero sits

on the edge of his bed contemplating the pistol
on his nightstand, you have to believe he might

It is a clever argument within the Black Aperture, because that gun–not only loaded but already fired–is present from the very beginning of the collection. The possibility of “not firing” that he posits in the Chekhov poem, is no longer a possibility. The speaker circles the once possible act of not-firing, while coming to grips with the already accomplished fact. That he does so with clarity, compassion, understanding and brilliance raises Matt Rasmussen’s Black Aperture from a mere elegy for a dead brother into something much more universal and accessible to us all.