I had never seen it before.  I had never read it before. But I got cheap tickets to see Titus Andronicus Wednesday night at The Philadelphia Shakespeare Theater.

Not knowing anything about it, I took out my Penguin Collected Plays to read the editor’s introduction. Here’s what it said:

“Titus Andronicus is a ridiculous play. This gallimaufry of murders, rape, lopped limbs, and heads baked in a pie, lavishly served with the rich purple sauce of rhetoric, may have been to the taste of the Elizabethans, but what is one to make of it to-day?”

Another comment I saw said to imagine it as if Shakespeare had written Pulp Fiction.

My god, what did I get myself into…all because of the lure of a $10 ticket.

The performance was electrifying. A group of seven actors who were engaging and competent, a dozen or so hand puppets, shadow-puppets, and lots and lots of blood presented what resembled a petite guigonol more than what we think of when we think of a Shakespearean play.

Some say that Hamlet is Shakespeare’s deadliest play, but it pales next to Titus, and the violence here is so much more gratuitous than the violence in the former play. To give you an idea, lying about the stage at the end of the last scene are an evil queen murdered by Titus,  her emperor husband murdered by Titus’ brother,  Titus’ daughter–who Titus kills shockingly by breaking her neck–and Titus himself. Yet the body count doesn’t even begin to describe the depravity.  The queen and emperor are dead, but only after Titus had fed them a pie made with the bones and entrails of the queen’s sons whom Titus has killed. He has slain these two sons because they  had raped his daughter, cut out her tongue, and cut off both her hands.

Had enough?  It is even stranger.  In an earlier scene, Titus is a broken man. His poor daughter sits next to him, unable to speak of or point at her attackers. Her husband has been murdered by the queen as well, and her two brothers (Titus’ sons) have been set up and charged with the crime.  In this particular scene, the queen’s henchman makes a deal with Titus.  He will return the sons to their father in exchange for his hand.  Titus chops off his hand and gives it to the man, who promptly returns with three bell jars, one containing Titus’ hand, the other two containing the heads of his sons.  As the scene ends, Titus leaves the stage with one of the containers that holds his son’s head, his brother (who has found Titus in this pitiful condition) carries the other, and his poor daughter, with no hands of her own, carries the container holding her father’s hand in her mouth. This is perhaps the only pitiful scene in the play because the rest is so “over-the-top” violent that it become cartoonish.  (I tried to count the number of dead, but kept losing track.  Not counting his twenty-one dead sons that Andronicus is returning to the family grave in Rome when the play begins, I come up with 14 corpses, three dismembered limbs and two beheadings. Geeesh!)

Titus Andronicus comes early in Shakespeare’s career. It is his first attempt at tragedy, and he was capitalizing on the Elizabethan penchant for these bloody, revenge tragedies.  And he was learning on the job. There seems to be little of the “interiority” in the characters, that self-awareness that will come later and that makes the characters of Hamlet, Macbeth, and Lear so human, and so tragic.  He is working through the language, the germs of genius are evident, but he has not yet the confidence to take the linguistic leaps that he demonstrates as early as a year later.

As I walked out of the theater, I mentioned to the usher that I couldn’t believe that I was chuckling and smiling after what I had just witnessed.  Maybe there IS something cathartic about it…but I don’t think so. Maybe it was the sheer boldness, the cleverness of the production, the wit of the design.  I don’t know.  I do know it was a very good night of theater and the Philadelphia Shakespeare Theater should be quite proud.

Later, when I got home I discovered that the play had  been made into a film by Julie Taymor, Titus. I vaguely remembered this now.  I guess it will be next on my movie list.  But then that poses a question: Why? 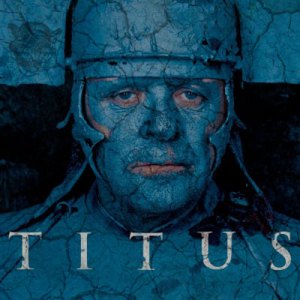 Why, in recent years, has there been a major motion picture by a major director? Why does a small local theater choose to do a Shakespeare play that very few people are aware of?  It had been all but forgotten until the mid-20th century when Peter Brooks famously staged it for the RSC with Vivian Leigh as the put-upon daughter, and then it took on a new life. In recent times, there have been many productions in the UK, in the US, in Japan, productions that emphasize the political…ones that emphasize the family dysfunction.  (Click here for an interesting article on the history of the play’s performances.)

But the question remains: why? Why has it been reborn in our time?

Have we become inured to violence? Completely desensitized?  Or does the extreme violence of the play now reflect our own violent world? Our own shattered realities?  I wonder about my own experience at the performance–the violence of the play was not upsetting or revolting; it was, in fact, silly–and I am a person who for the most part shies away from violence in the films and books that I choose. As I said, the production was cartoonish and even slapstick.  But then what does that say about us?

If  art is supposed to make us think beyond our initial reaction, then my experience with Titus Andronicus was a success.  I can’t get it out of my head.